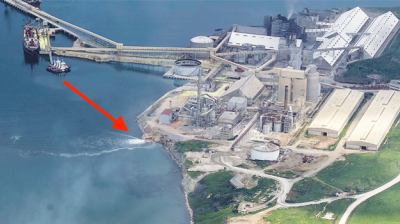 Bagfas' plant on the coast of the Sea of Marmara.
By Akin Nazli in Belgrade June 17, 2021

Like a monster sludge, the “sea snot” blanketing Turkey’s Sea of Marmara has claimed its first sizable commercial victim—Istanbul-listed fertiliser maker Bagfas (BAGFS) has been ordered by the government to cease operations at its coastal plant, according to local media reports.

The instruction came following an inspection conducted at the premises as part of the ongoing disaster management plan launched to address the growing crisis, with the mucilage posing a severe threat to marine fauna and flora in the semi-enclosed sea south of Istanbul. The industrial facility has reportedly been ordered to stop production until it can meet environmental law. Scientists have pointed to global warming and wastewater containing nitrogen and phosphorous as key factors in the spread of the viscous, greyish substance that has started to sink below the waves in substantial volumes, suffocating life on the seabed.

The Erdogan administration—more unpopular than ever as the economy threatens to crater, according to opinion polling evidence—is making a very loud and public display of coming to the rescue to save the day (while scientists have put forward some top boffin ideas such as turning the thick slimy matter into utility gas and, perhaps to Bagfas’ consternation, fertilizers), and Bagfas’ misfortune is perhaps that its location, in Bandirma town of Balikesir province, as well as its discharges into the sea, are highly visible.

However, the real problem is that Turkey’s largest industrial zones have surrounded the Sea of Marmara for more than half a century. Not only that, Istanbul and the surrounding region is inhabited by 25-30mn people. Istanbul alone has more than 15mn registered residents, up from around 1mn in 1950 and 5mn in 1980. Imagine the flow of untreated wastewater into the sea. Did anyone set in motion a comprehensive environmental-friendly plan in line with this massive expansion of people and urbanisation?

2017: The Gulf of Izmit on the northwest coast of the Sea of Marmara hosts the largest industrial zone in Turkey.

Turkey’s first ever industrial zone was opened in 1962 in Bursa province, found in the southern Marmara region. By now, there are more than 200 industrial zones countrywide.

“This [‘sea snot’] is not an isolated event. This is a chain. This is a result. We’ll see these kind of anomalies. The Sea of Marmara died in 1989. What we see is the decay of a corpse,” BBC News Turkey on June 3 quoted hydrobiologist Levent Artuz as saying.

Prior to any effective action, scientists need to achieve a stabilisation of the marine environment in order to carry out measurements, Artuz said.

How much does the Turkish government really care about the plight of the Sea of Marmara? Enough to push a succession of industrial giants surrounding the sea to stop pollution? There is no power in Turkey that could order that. They employ millions of people.

Another deadlock. Another slow-motion train crash. A Turkey classic is in progress here.