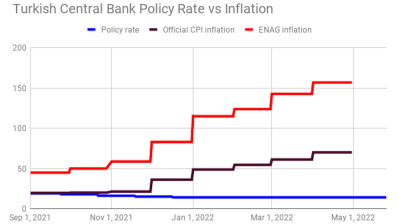 Turkey’s official consumer price index (CPI) inflation in April amounted to 69.97% y/y in April, following on from the 61.14% reported for March, the Turkish Statistical Institute (TUIK, or TurkStat) said on May 5.

The April figure (presented with great discipline as 69.97% rather than 70% by officials), marked the highest headline inflation recorded by Turkey since the 73% posted in February 2002.

At 69.97%, Turkey left Suriname behind in the global inflation league. Turkey’s next rival is Zimbabwe, which took fifth place in April with 96%.

The ENAG research group, an Istanbul-based outfit led by academics that provides independent assessments of where Turkey's inflation actually stands, calculated that CPI inflation in April was 157% y/y, following on from 143% in March.

TUIK, meanwhile, gave an official figure of 122% y/y for producer price index (PPI) inflation in April, up from 115% in March.

On April 28, the central bank hiked its expectation for end-2022 official inflation to 43% from the prediction of 23% it presented in its January inflation report.

The upper limit on the official inflation forecast was also moved up, taking the expectation to 47% from 28%.

The authority expects official inflation to peak at below the 75%-level in May and to fall across the remainder of the year.

The guidance is based on the assumption that the Turkish lira (TRY) will not experience another crash.

Turkey’s central bank currently serves as a lira printing house and as an accounting department for the palace administration.

The war in Ukraine is a “new normal” for the markets now. But relative stabilisation in commodity prices (compared to the wild rides seen in February and March) has occurred at significantly higher prices, while the stress in commodities directly related to Russia or Ukraine (such as sunflower oil, natural gas) continues.

On May 26, Turkey’s monetary policy committee (MPC) is expected to hold its policy rate constant at 14% at its next rate-setting meeting.

On June 3, TUIK and ENAG will release their inflation figures for May.

The Erdogan regime has been aiming to keep the USD/TRY pair below the 15-level since March 4. It is unknown how much is flowing into the central bank’s account from the lira deposit protection scheme and exporters and tourism companies, while the reserves are declining.

For April, the trade ministry reported a $6bn trade deficit, suggesting a month on month recovery but a doubling of the deficit compared to last year.

It was last September that Turkey’s latest monetary easing cycle begin. Since November, the trade deficit has remained above the $5bn-level, accumulating to $45bn in the six month-period from November to April.

In May, a relatively limited recovery in external balances will continue as gas bills decline and the tourism season begins.

Turkey’s 5-year credit default swaps (CDS) have surpassed the 600-level while the yield on the government’s 10-year eurobonds remains in the 8%s.

There is no foreign interest in Turkish papers.

In April, net lira creation via loans amounted to TRY169bn as of April 27, following a record TRY208bn ($14bn) in March.

The regime is trying to introduce some "macroprudential measures" and non-capital controls while announcing new cheap loan packages.

Despite the eased monetary conditions, economic activity has not responded positively while Turkey's big export market, Europe, has endured its own slowdown since the beginning of 2022.

In addition, the Fed will begin reducing its balance sheet as of June 1, with a monthly cap of $47.5bn by September and $90bn starting from September.

On June 15, the Fed is expected to deliver another 50bp rate hike following its next market committee meeting. Updated projections from the governors will be released.

In March, the Fed governors anticipated the delivery of six more rate hikes in the remainder of 2022 to bring the policy rate to 1.75-2.00%. Two of them were delivered on May 4.

The USD index (DXY) remains above the 103-level, while the yield on 10-year US Treasury papers is below the 3.00-level. The EUR/USD is testing below the 1.05-level.

With the presidential election process in France concluded last week, the European Central Bank (ECB) and its French governor Christine Lagarde may get hawkish in the coming period.

Inflation in the Euro Area extended its record-breaking series to a sixth consecutive month with 7.5% y/y in April. Producer price inflation reached 37% in March.

Annual CPI inflation in the US rose to 8.5% in March.

In Turkey, social media is boiling over with anti-migrant propaganda. Hot-headed ideas are in circulation for transporting migrants back to their homelands.

Some ‘leaders’, who are aware of the required logistics even for carrying millions of watermelons to a wide geography spread from Syria to Pakistan, are ‘emerging’.

It costs nothing to swear at migrants on social media but hurling abuse at the person who has brought them to the country (that’s right, the fella in the palace who’s this week, in election mode, been talking about "returning a million") is forbidden.

Since the US withdrawal from Afghanistan last August, Turkey’s problem with uncontrolled migration has moved up a few places on the long list of the country’s woes that have got beyond the point where they can be solved.

Curiously, the regime has been pushing Turkish doctors and engineers to depart Germany for home, while not even registering who is entering Turkey via its eastern and southern borders. Not an effective approach to human capital.

Turkey, a perfect semi-colony, is not famous for solving its problems. Instead, it is skilful in doing whatever is required to necrotise them.

Since 2011, Turkey has been under a political authority that has invited everyone from Syria to Afghanistan into the country. After more than a decade, the Turks have now decided that the millions who arrived must now be sent back to their countries of origin. Most noble.

Turkey seems rather determined to create some serious violence over the migrants in the country. It is also well capable of doing so. Almost every day by now, there are clashes in various neighbourhoods.

As an example of the Turkish state’s more organised track record in creating violence, there is the determined killing and torturing of a sufficient number of Kurds per season (the season begins in spring). Such determination managed to create and sustain the Kurdistan Workers’ Party (PKK), which, still motivated by the Turkish state’s bombing operations, is sailing through its 50th birthday.

The PKK even managed to found a state in northern Syria under US patronage. Islamic State then broke in between the Kurds and the Damascus regime. While Erdogan was protesting “Kobane is falling” to Islamic State, Turkey gained a new neighbour, which carries posters of PKK founder Abdullah Ocalan.

It's a matter of time before murderous violence in socially corroded Turkey against migrants flares up. It would be no surprise if it breaks out soon or at the point where the Erdogan regime loses at the polls (elections are due at some point by June 2023 at the latest). Some state violence might help escalate the process.