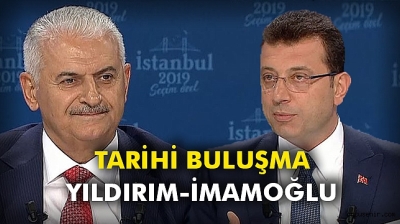 There were heated exchanges between Yildirim (left) and Imamoglu.
By bne IntelliNews June 17, 2019

Large screens were set up in the streets of Istanbul for a televised live debate between the two main candidates in a mayoral election rerun that many observers see as a test of whether Turkey can still claim to have something worthy of being called a “democracy”.

It was the first such televised clash in nearly two decades in Turkey and there were heated exchanges between opposition politician Ekrem Imamoglu of the Republican People’s Party (CHP)—the man who shook up Turkish politics in late March by recording a shock win in the original election, before, after complaints from President Recep Tayyip Erdogan and his ruling Justice and Development Party (AKP), the triumph was annulled due to alleged polling station “irregularities”—and ex-PM and AKP candidate Binali Yildirim—who was defeated by Imamoglu by 48.80% of votes to 48.55% in the first poll.

With the economy on the rocks and Turkey’s EU accession bid to all intents and purposes frozen due to what eurocrats see as Ankara’s scant regard for human rights, the AKP lost Istanbul, Ankara and several other municipalities in the local elections, throwing up question marks over whether Erdogan still commands sustained popular support in the country following 17 years as its leader. Losing the June 23 revote would be a huge blow to his prestige, and his credentials as a strongman, but he has lately downplayed the significance of the poll, staying out of the limelight, unlike in the build-up to the first vote during which he was on the stump addressing several crowds each day.

Row over "stolen votes"
In the TV debate, Yildirim told Imamoglu: “Strange thing happened when your votes were counted. Votes were stolen.”

“Who stole votes for God’s sake?” responded Imamoglu. The election board had made no such allegation in its decision to annul the vote, he pointed out. “We are conducting a struggle for democracy,” Imamoglu added. “It is a struggle for Istanbul, for normalisation, for a clean administration free of arrogance.”

The three-hour TV debate was broadcast on all major channels. Turkey’s economic woes, the large numbers of migrants in Istanbul and the shortage of green spaces in the cultural and business capital of 15mn were among topics discussed.

In a speech on June 17, quoted by Reuters, Erdogan questioned why foreign media were so interested in “just a mayor being elected”, stressing that the city council was dominated by his AKP.

The opinion polls that are available—finding reliable surveys in Turkey is challenging—have consistently shown Imamoglu leading in the run-up to the revote, in some cases by several percentage points.