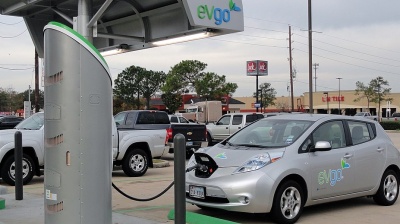 Koc, the dominant player in the Turkish automotive industry, has been focusing on EV investments. / eVgo Network, cc-by-sa 2.0 generic.
By Akin Nazli in Belgrade July 14, 2022

Wat Mobilite, a unit of Turkey's Koc Holding (KCHOL), has launched its first electric vehicle (EV) charging station at Koc's HQ, according to a statement by Koc.

Koc, the dominant player in the Turkish automotive industry, has been focusing on EV investments.

SK On is a subsidiary of SK Innovation. SK Innovation is a unit of SK Inc (Seoul/034730), which is an SK Group company.

A 30-45 GWh annual production capacity is targeted for launch in 2025 at the planned Ankara plant.

Transporter production will be transferred to Ford Otosan’s Golcuk plant from Volkswagen's plant in Hanover, Germany.

Also in March 2021, Ford Otosan said that it would invest €2bn to produce commercial EVs and batteries at its Golcuk plant.

In March 2022, Ford Otosan acquired Ford Romania. An all-electric version of the Puma (SUV) model will be launched in 2024.

In Turkey, Otokar (OTKAR), the bus and army vehicles unit of Koc Holding (KCHOL), as well as Karsan (KARSN) and Temsa, a unit of Sabanci Holding (SAHOL), are already producing electric buses.

In June, government-run TOGG, which has been developing an assembly plant for an EV as well as a battery montage plant with China-based Farasis, obtained a licence to set up a network of charging stations.

Siro Silk Road, a JV between TOGG and Farasis, is to build a battery plant in Turkey’s Bursa province with an annual production capacity of 20 GW.

TOGG is to launch 600 stations with 1,000 sockets under its Trugo brand.

ZES Dijital, launched by Zorlu Enerji (ZOREN), has 1,016 stations with 1,913 sockets across all 81 provinces of Turkey as well as in Northern Cyprus and Montenegro.

Sharz.net (EVS Elektrikli Sarj Sistemleri), launched in 2019, plans to launch 50 new stations that will bring its network to 350 stations.

Aksa Sarj, launched by Aksa Enerji (AKSEN), is also active in the market while Sarjet, launched by Turkey’s military pension fund Oyak, is preparing to enter the market.

On July 6, Smart Gunes Enerjisi Teknolojileri (SMRTG), which has an annual photovoltaic (PV) panels production capacity of 1,200 MW at its plant in Gebze town of Kocaeli province (launched in August 2017 with an investment of $20mn in strategic cooperation with China’s Sumec), said that it is to launch 42 charging stations.

On July 5, Kontrolmatik (KONTR) said that it is to launch 66 sockets.

Presently, there are more than 4,000 charging stations across Turkey.

At current prices, an EV costs TRY0.67 per kilometre to run in Turkey, while there are nearly 7,000 EVs in the country.

Moody’s downgrades Turkey to six notches below investment grade
Home of the humbled lira, Turkey’s the biggest cryptocurrency market in the Middle East
Envoy says start made on construction of Turkish attack drone factory in Ukraine

Russian e-commerce turnover up 1.5-fold in 1H22
3 days ago
Home of the humbled lira, Turkey’s the biggest cryptocurrency market in the Middle East
3 days ago
Business Insider: Western tech majors have tested or used controversial Russian face recognition technology
9 days ago
From 4G to 6G: How Russia seeks to develop mobile networks amid shortages of domestic frequency and foreign equipment
9 days ago
Should I stay or go for founder of Russian internet major Yandex
14 days ago