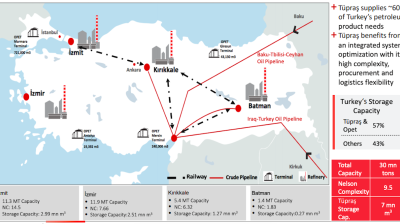 World’s largest asset manager BlackRock at the end of last week raised its stake in top Turkish refiner Tupras (TUPRS) to 5.01% from 4.977%, buying 71,297 shares at an average price of Turkish lira (TRY) 114.3, the New York-based corporation said in a stock exchange filing. But that was just a precursor to another move.

The transaction sealed at the end of last week accounted for 0.03% of Tupras’ total share capital, 0.06% of its free-floating shares and 4% of its average daily trading volume in 2019, Seker Invest calculated.

On February 3, Blackrock said in another filing that it sold 35,924 Tupras shares at an average price of TRY113.2, shifting its stake to 4.99% of the refiner.

Tupras is planning to release its Q4 financials on February 12.

Shareholders that have a more-than-5% stake in a Borsa Istanbul-listed company are obliged to inform public disclosure platform KAP of any transactions in the company’s shares.

BlackRock, which worldwide has more than $7 trillion under management, has also been shifting positions in Turkish Airlines stock. Its stake in the flagship carrier has been moving above and below the 5% threshold.

BlackRock was among investment funds present at a meeting held on November 15 in London between Istanbul mayor and Erdogan administration opponent Ekrem Imamoglu and finance industry representatives.

BlackRock also has stakes in state-controlled Halkbank—currently in a battle with New York prosecutors attempting to bring it to trial on an indictment alleging Iran sanctions-busting—and real estate investment trust Emlak Konut REIT.

The global investment management corporation is at the same time the biggest single holder of Turkish government bonds.