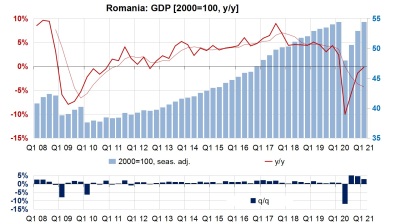 On the formation side, the moderate increase of industry (including utilities 18.8% of GDP) and the sharp expansion of the IT&C sector (8.8% of GDP) offset the steep contraction seen in the services sectors.

The B2B services sector (6.6% of GDP) contracted by 10% y/y in GVA terms resulting in a negative 0.7pp contribution to the overall GDP annual dynamics.

The companies in the sector of services to households (only 2.8% in GDP) generated 16% smaller value-added resulting in a negative 0.5pp contribution to the annual change in GDP.

Notably, the contribution of the net taxes was negative (-0.2pp), against adverse expectations generated by the deferred tax payments reported by the government.

On the utilisation side, there are two key visible features: firstly, gross fixed capital formation surged by nearly 10% y/y, the equivalent of a 1.7pp contribution to the annual movement in GDP.

Domestic consumption also edged up, by 1.3% y/y resulting in a 1.1pp contribution. However, a larger part of the domestic demand (compared to Q1 last year) was supplied from foreign resources.

bneGREEN: Most green energy beats coal on price in 2020
Growth of Romania's stock of loans reaches double digits at end-May
Romania in line with the Baltic states as fastest converging EU members