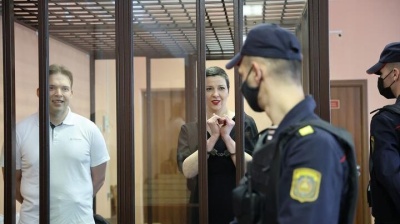 Picture from the trial of Maria Kolesnikova and her colleague Maxim Znak on September 6, 2021. Their trial was closed to the public. / Reuters
By bne IntelliNews December 1, 2022

Jailed Belarusian opposition figure Maria Kolesnikova was placed in a “punishment cell” on November 22. Only 6 days later, she was rushed to the hospital where she is currently in a serious but stable condition.

According to the Belarusian prosecutor’s office, Kolesnikova was placed in a punishment cell for “being in the wrong place during work hours” and for “impolite treatment” of the staff at the prison colony. However, no exact explanation has been given for when and where these offenses occurred.

On November 28, Kolesnikova was taken to the city of Gomel’s emergency hospital’s first surgical department and then transferred to an intensive care unit. Unconfirmed reports claim that she was suffering from stomach problems.

Kolesnikova’s lawyer, Vladimir Pylchenko, was not allowed to visit her for the third time in a row on November 29. According to the prison colony administration, this was due to the fact that Kolesnikova had not issued any statement, which she usually issues and then hands over to her lawyer. Her lawyer sent complaints to various law enforcement agencies, appealing for a visit since he fears for the state of her health. However, Pylchenko has received no replies to his complaints.

A punishment cell is a special cell to which Belarusian prisoners can be sent for misconduct at their prison colonies. The punishment cells have been described by many as being extremely harsh and being sent to one has more than once before resulted in the hospitalization of prisoners. The cell’s are small, isolated and only allow for a bed-bunk to be unfastened at night. No books or gifts are allowed in these cells and female prisoners have several times complained that they’ve even been denied basic hygiene articles.

Kolesnikova was a member of Belarusian presidential candidate Viktor Babariko’s team in 2020. Babariko is currently serving a 14 prison sentence and has been declared political prisoners by human rights organizations.

Last year, Kolesnikova was sentenced to an 11 year prison term in the medium-security prison colony IK-4 in Gomel, a city located in south-eastern Belarus. Among other things, she was accused of “attempting to seize power”, “public calls for the seizure of power” and for “creating an extremist formation”.

Exiled Belarusian opposition leader Svetlana Tsikhanouskaya has called on anyone with information about Gomel’s emergency hospital to share it with journalists. In an official statement, the US embassy in Minsk said that they are closely following Kolesnikova’s hospitalization, that they hope she receives high quality medical care and recovers quickly. The US State Department’s spokesperson Ned Price said that “the Belarusian regime bears full responsibility for the health of Maria Kolesnikova and the other 1440 political prisoners.”

Belarusian law enforcement agencies have previously taken low consideration to the health of political prisoners. As political repressions within the country are still increasing, it’s doubtful that they will begin to care about the prisoner’s health anytime soon. In general, when the hospitalization of someone close to the exiled opposition occurs, the regime is likely to consider it a win. The regime uses bad treatment of political prisoners as a way to punish the exiled opposition, as well as the western human rights watchdogs and embassies of Western countries that monitor human rights violations in Belarus.

VISEGRAD BLOG: When Eastern European states speak out they are now listened to
Trial begins in Belarus against exiled opposition figures
What does 2023 hold for Belarusian potash exports?