Japan’s Shinzo Abe arrives in Iran. Analysts ask what message he might bear from Trump 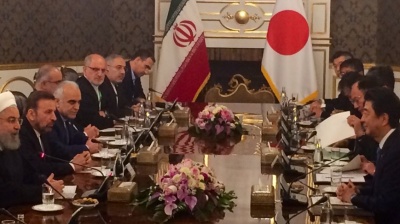 The question on the tip of everybody’s tongue as Japanese Prime Minister Shinzo Abe arrived in Tehran on June 12 was whether he came bearing a useful message from Donald Trump.

Abe lately hosted Trump when he paid a state visit to Japan, with the US President encouraging Japan’s PM—the first Japanese leader to come to Iran in 41 years—to engage in some diplomacy between Washington and Tehran. Their horns have remained locked since the Trump administration unilaterally withdrew from the nuclear deal in May 2018 in favour of launching a devastating economic sanctions campaign to force the Iranians to make Middle East concessions.

The Japanese delegation offered no direct comment on whether Abe might be attempting to arrange a back-channel via which the US and Iran could at least talk about talking—as things stand, Trump says he is willing to enter into negotiations, while the Iranians say he must cease his “economic war” against their country and show respect before they will countenance the idea—but at a joint press conference in Tehran held by Abe and Iranian President Hassan Rouhani late on June 12, the Japanese prime minister said: "Amid rising tension, it is essential for Iran to play a constructive role in strengthening peace and stability in the Middle East, so that this region won't be destabilised further or accidental clashes won't happen."

The Japanese, said Abe, was determined to do everything it could to help with that role. It is doubtful, however, given that Abe only very recently hosted Trump on his state visit to Japan, that the Iranians could accept him as an entirely impartial broker.

For his part, Rouhani said Iran did not want conflict with the US but would deliver "a crushing response" if it were attacked. 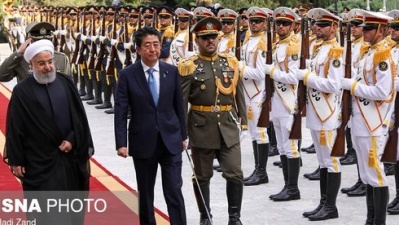 Fell in line
Abe has worked hard to maintain cordial relations with Trump and when the US announced in April that from the start of May it would seek to drive all Iranian crude oil shipments out of the world market, Tokyo fell in line by ceasing to import oil from Iran. At the joint press briefing, Rouhani stated that Japan wanted to continue buying Iranian oil exports.

"Japan supports the 2015 agreement and is unhappy that the US pulled the plug and thinks it's a really big mistake," Professor Jeff Kingston, director of Asian Studies at Tokyo's Temple University, was quoted as saying by the BBC, adding: "But it has no real say in the matter, so when US imposed sanctions it's not surprising that Japan followed."

Abe, who according to his spokesperson spoke to Trump on the phone one day before his departure to Iran, was also due to meet Iranian Supreme Leader Ayatollah Khamenei.

Officially, Japan and Iran are marking the 90th anniversary of their diplomatic relationship this year. Abe was given a red carpet welcome at Tehran’s Mehrabad Airport by Iranian Foreign Minister Mohammad Javad Zarif, during which a band played the Japanese national anthem. The later joint news conference with Rouhani was aired live in Japan on public broadcaster NHK.

Before going to the airport to receive Abe, Zarif held two rounds of meetings with Japanese Foreign Minister Taro Kono.

In his initial meeting with Kono, Zarif hailed Japan as a good economic partner and nation that took a friendly approach to the Islamic Republic.

Before the 1979 Islamic Revolution in Iran, Japanese companies were some of the most prominent investors in Iran, with the Japanese Embassy holding a prime position on the main thoroughfare.

Despite Iran’s international isolation in recent years, the Japanese government built a new embassy compound in Tehran’s affluent northern district. Japan is also one of the only countries permitted to operate a foreign language school in Iran.

Strong hopes Georgia's political crisis is over after EU brokered agreement
4 hours ago
Bulgaria’s outgoing government under scrutiny over sudden hike in budget deficit
16 hours ago
Team Navalny pulls the trigger on the next big demonstration scheduled for April 21
20 hours ago
Samolet see EBITDA up by half despite the coronacrisis
22 hours ago
Will Belarus merge with Russia this week?
1 day ago