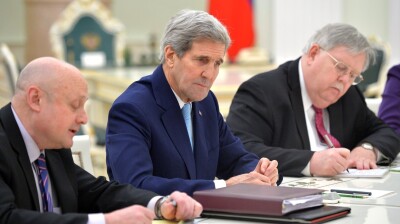 The US climate representative John Kerry was in Moscow to meet Russian Foreign Minister Sergei Lavrov to start co-operation with Russia on climate change
By bne IntelliNews July 13, 2021

It was an eventful day for Russian diplomacy on June 12. US Special Presidential Envoy for Climate John Kerry was in Moscow to meet with Russian Foreign Minister Sergei Lavrov to begin co-operation on climate change between Russia and the US. On the same day, Russian President Vladimir Putin put the cat amongst the pigeons by releasing a 5,000-word essay on Russia’s historical ties with Ukraine, again calling them “one people.”

During the widely anticipated one-on-one summit between US President Joe Biden and Putin in Geneva on 16 the two leaders promised to co-operate on key areas of mutual concern. Climate change was one of these topics and Kerry’s trip to meet with Lavrov is the first fruit of that promise.

Kerry said that as US and Russia are among the leaders in greenhouse gas (GHG) emissions, they must act together to prevent climate change.

"The deal is to be able to deal with the climate issue separately. It’s too important, too significant, and we very much need to move together. The US is the world’s second largest emitter of greenhouse gases; Russia is the fourth. We are among that small group of 20 nations that is the equivalent of 80% of all emissions. What we do, what we decide to do is critical," Kerry said as cited by the Kremlin.

Climate change is one of the areas of common ground between the US and Russia where they might work in harness. As bne IntelliNews reported, Putin held out the hand of co-operation in April by attending an online summit with Biden to discuss co-ordinating international action to curb temperature rises. The meeting came on the same days Putin ordered Russian troops that had been massing on the border with Ukraine to stand down. The dramatic day was seen as a gesture by Russia intended to show that while Moscow could cause real trouble, it was also prepared to compromise in the interests of finding a new “stable” relationship with Washington.

Kerry’s trip was the first practical result of the Geneva summit and the first step in thrashing out just how the two countries can co-operate.

Kerry said the co-operation between Washington and Moscow on climate must develop despite the existing disagreements. Kerry noted that Washington is glad that Putin took part in Biden’s virtual summit on climate in April, and that the White House believes that the Geneva summit was constructive and was important for both countries. Kerry paid special attention to Russia’s role in the Arctic, including its current presidency in the Arctic Council.

On the same day Putin continued to make trouble and published a 5,000-word essay on his view of the historical relationship between Russia and Ukraine in both the Russian and Ukrainian languages. Putin had promised to write the essay during his marathon call-in with the public on June 30.

Entitled “On the Historical Unity of Russians and Ukrainians,” the essay spans the relationship between the two countries from the Middle Ages to the present day. Russia has always looked to Kievan Rus as the birthplace of the Slavic people.

But controversially Putin again referred to Russians and Ukrainians as “one people.” One of the many issues that stands behind this statement is that during the Soviet era Ukraine was not a country, but a region in Russia – which is why it was referred to as “the Ukraine” not just “Ukraine” in the Soviet era, as the definite article is applied to regions, not countries.

It is widely believed by many observers that Putin does not regard Ukraine as a “real” country, and continues to see it simply as a breakaway region of Russia.

Ironically the annexation of the Crimea in 2014 and the war in the Donbas between Russian-backed separatists and the government in Kyiv have done more than anything else to establish a clear sense of national identity amongst Ukrainians than anything else the Kremlin could have done.

While Putin may have been simply trying to point out that the Slavic people have a common ethnicity with deep, long and common roots, this is not a message that goes down well in Ukraine, which is resolutely proclaiming its new sovereign identity entirely separate of Russia.

Putin’s essay was a meandering journey through the long shared history of the two peoples, touching on everything from the Mongol invasion to the collapse of the Soviet Union and more.

The essay was clearly an extension of Russia's new National Strategy that was released a week earlier and was called  a “paranoid’s charter” by bne IntelliNews columnist Mark Galeotti in an opinion piece. The strategy is reviewed once every five years and is the blueprint of Russia’s foreign policy, but this latest iteration frames Russia’s place in the world as in conflict with an “anti-Russia” coalition in the West and “alien forces,” a phrase lifted out of the Soviet-era lexicon.

Putin’s essay explicitly accused Kyiv of being led astray by the West, which is using it as part of its anti-Russian campaign, while he countered that Ukraine and Russia are “almost identical,” Meduza reports in a summary of the essay.

It is not clear what Putin hopes to achieve with the essay, which is guaranteed to inflame passions in Ukraine. However, with Duma elections looming part of the rationale is that the essay was also aimed at the Russian voting public, as the view that Ukraine is part of Russia is widespread amongst ordinary Russians. Putin has used the “enemy at the gate” narrative very effectively to rally ordinary Russians to his flag and a big dollop of nationalism that emphases Russia’s long history and pre-eminence will also play well to the domestic audience.

The essay may have had another purpose, as also on July 12 Ukrainian President Volodymyr Zelenskiy was in Berlin to meet with German Chancellor Angela Merkel.

Relations between Germany and Ukraine have become strained since Berlin refused to block the Nord Stream 2 gas pipeline, now completed, which will cut the country entirely out of the gas transit business between the Russian Yamal gas fields and its customers in the EU. That will cost the cash-strapped government in Kyiv at least $2bn a year in lost revenue.

Zelenskiy has also been upping the pressure on the EU and Washington by vocally demanding clear statements of the West long-term intentions with respect to Ukraine – and a concrete timetable for the country's eventual accession to both the EU and Nato. No promises have ever been made to Kyiv for membership of either body, but warm relations and the support for Ukraine against Russian aggression have membership promises implicit in them.

Zelenskiy concluded a two-day visit with Merkel with an official dinner, but the Ukrainian president came away largely empty-handed. He has been lobbying Berlin to halt the construction of Nord Stream 2 or at least to put restrictions on its use.

In reported comments Merkel said that Ukraine must remain part of the transit infrastructure even after Nord Stream 2 is completed.

“Nord Stream 2 is a huge security threat that is masked as an economic project,” said Zelenskiy during his joint press conference with Merkel.

“We guarantee that Ukraine will maintain its status as a gas transit country,” said Merkel without actually providing any guarantees, the Kyiv Post reported.

However, Sergiy Makogon, CEO of GTSOU, told bne IntelliNews in an exclusive interview that it was not profitable for Ukraine to run its transport network with the insignificant amounts of gas transit being proposed and that it would decommission much of the pipeline network unless a new major transit agreement was reached.

Zelenskiy was lobbying for the Normandy Four (Russia, Ukraine, Germany and France) format for peace talks between Russia and Ukraine to be expanded to include the US and for the Nord Stream 2 discussions to be taken up by the group.

Zelenskiy also failed to get Merkel to commit to new or concrete security arrangement. At the same time, neither were any new promises of financial support made, despite the fact that Ukraine faces a $11bn debt redemption spike in September which it will struggle to cover out of reserves. Kyiv is currently in talks with the International Monetary Fund (IMF) on restarting its stalled $5bn stand-by agreement (SBA) but progress is slow. Berlin and the EU in general have informally suspended releasing any more financial aid to Ukraine until a new SBA deal can be struck with the IMF.

Merkel is due to travel to Washington to meet with Biden this week, and Ukraine will feature high on the agenda.