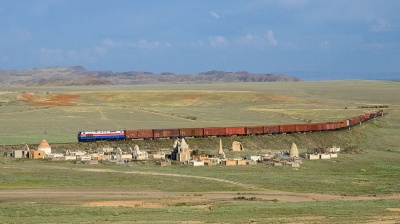 Businesses in Kazakhstan reliant on Russia as a re-export route may be starting to feel some heat amid the heavy international sanctions imposed on Moscow over its invasion of Ukraine.

Kazakh business magazine LS noted in March that international manufacturers of household and electronic equipment were halting deliveries of their products to Russia and implied that this could in turn impact Kazakhstan's imports of electronic equipment. Russia occupies a leading position in providing the Kazakh market with refrigerators, electric and gas stoves, washing machines and dishwashers.

Exports to Russia from other countries in March—shipments that ensure continuous operations at the country’s industrial enterprises—fell by 62% over the month, according to FourKites, a platform that monitors global supply chains. The overall supply of cargo declined by 65%, while the supply of finished consumer goods decreased by 60%. The data ranges over goods not only necessary for Russia's market, but also for the markets of other post-Soviet countries. Three decades after the fall of the Soviet Union, Russia remains a transit and production hub for countries like Kazakhstan.

Daniyar Sasykov, commercial director of the EVRIKA electronic equipment sales company in Kazakhstan, was quoted by LS as saying that “given a large share of imports are produced in Russia or consolidated and transited to Kazakhstan, there is a huge risk of breakdown in the supply chain, which will lead to a shortage of goods and a subsequent rise in prices and will put significant pressure on inflation.”

"As a general rule, retail chains have enough inventory for two to three months. And despite the increased demand of recent days, we are confident that there are enough goods," Sasykov added, while cautioning that shortages could materialise later.

Alibek, a man who works for an online store that sells musical instruments and music recording equipment in Kazakh commercial capital Almaty, told bne IntelliNews that “music equipment retailers have all been having troubles with importing equipment” due to the double whammy of the global semiconductor chip crisis and the sanctions on Moscow.

“The importing issues started a year ago, but with the war in Ukraine and the sanctions on Russia things have gotten more complicated,” he said.

“We have been experiencing shortages of car paint that normally comes from Russia and the prices for car paint have been surging,” Igor, a car mechanic working at an Almaty vehicle repairs and service centre, told bne IntelliNews. He also mentioned issues with importing certain car parts from Russia, though he did not elaborate.

“No reduction in the near future”

Despite sanctions on Russia impacting the supply chain, many Kazakh retailers and distributors appear to remain upbeat.

Distributors, retail chains and online retailers in Kazakhstan, interviewed by the Vlast.kz news agency in late March, said that they had not faced marked declines in product supplies from Russia.

“We do not expect a large reduction in the range of Russian goods in the near future. Our suppliers are working hard to change the supply chain and keep products in stock. They are changing things with a long-term perspective in mind,” Dmitry Shishkin, PR manager of the Magnum retail chain, told Vlast.kz.

Vlast.kz also cited several other distribution chains as expressing similar optimism. However, this phenomenon appear where Russian producers are concerned, not to imports of goods traditionally re-exported into Kazakhstan via Russia.

According to the commercial director of online retailer Arbuz.kz, Rasul Zhanabekov, difficulties with imports of products from Russia have arisen in regard to shipments of goods produced by large foreign companies like Mars, P&G and Nestle, which continue production in Russia, Vlast.kz reported. Zhanbekov also pointed out that Kazakhstan was likely to start receiving these products from Turkey and Poland instead as there had been an increase in production in these countries amid the applying of swingeing sanctions on Russia.

Arbuz.kz has itself started looking for alternatives to goods imported from Russia. It was searching in Europe and neighbouring Central Asian nations, Zhanabekov noted.

“Most products that used to come to Kazakhstan from Russia are now going to be imported into Russia from Kazakhstan,” Evgeny, a trucker, told bne IntelliNews.

Evgeny noted that he was now seeing opportunities for himself in getting into the business of exporting bed linens, bought in the Chinese-Kazakh Khorgos free trade zone, to Russia.

It is likely that most re-exports from Kazakhstan to Russia will take place in relation to Russian companies moving their business to Kazakhstan in order to continue selling goods on the Russian market.

Czech government remains colour blind on green issues
41 minutes ago
Poland ups the ante in feud with Brussels over judiciary reforms
12 hours ago
What's the current outlook for Belarus' export sector?
1 day ago
Russian gas exports to Europe tumble in June
1 day ago
Can we trust Russia’s economic statistics?
3 days ago