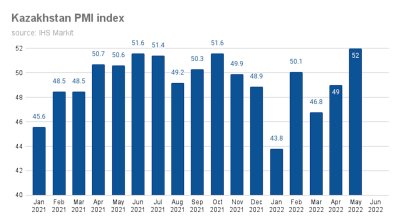 The Kazakh PMI was back in the black in May, expanding to 52 after contracting in the last two months, due to the shock of the war in Ukraine. / bne IntelliNews.
By bne IntelIiNews June 2, 2022

The Kazakh manufacturing sector signalled a return to growth in May following a period of disruption caused by the outbreak of war in Ukraine and subsequent imposition of sanctions on Russia, according to the latest purchasing managers' index (PMI) survey data from Tengri Partners and IHS Markit.

The index posted 52.0 in May, after posting 49 in April. The headline Kazakhstan Manufacturing PMI is a composite single-figure measure of manufacturing performance. Any figure below 50.0 represents a deterioration. Growth began recovering as renewed increases in output and new orders were recorded, with purchasing activity raised accordingly and workforce numbers held broadly stable.

Output rose for the first time in three months. Higher output requirements and rising new orders led firms to expand their purchasing activity for the first time in six months. At the same time, stocks of purchases continued to fall significantly as inputs were used to support production.

Employment was broadly unchanged for the second month running in May. Some firms increased staffing levels in line with greater output requirements, but others reported difficulties in recruiting specialist staff.

"The latest PMI data point to a revival in Kazakhstan's manufacturing sector after a challenging period following the outbreak of war in Ukraine. While issues around logistics continued to hamper efforts to secure inputs, the picture for demand was more positive as new orders returned to growth, feeding through to higher production.”

"Operations are likely to remain tricky for some time, but should the supply-side headwinds start to ease then there is the potential for growth to be sustained," he added.

Poland’s CPI growth rate picks up just 0.1pp to 15.6% y/y in July
2 days ago
Romanian stock exchange reaches new record as BET-TR rises 5.7% ytd
2 days ago
Population decline to take Emerging Europe back to the early 20th century
2 days ago
Russia’s international reserves up $3.6bn in one week to $571bn
3 days ago
CPI inflation in Moldova hits 33.6% y/y in July
3 days ago