Kazakh officials said there were around 1,000 arrests in the election protests. Now they say it was four times that 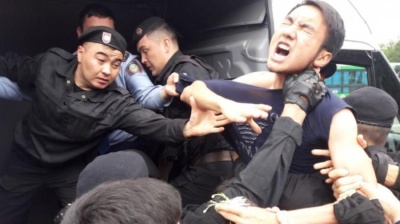 Kazakh officials hugely understated the number of arrests that took place during presidential election day and on a few days afterwards.
By bne IntelliNews June 19, 2019

Kazakh Interior Minister Erlan Turghymbayev told journalists on June 18 that the number of protesters detained during the rallies against the presidential election, which started on the day of the poll on June 9, actually stood at nearly 4,000 people.

The number is more than fourfold the number of arrests previously disclosed by the Kazakh authorities, originally reported at just under 1,000 people. When the previous figure was announced, Kazakh opposition activists pointed out on social media that the government’s figures were unrealistic as they did not match reports of arrests at individual police stations. One opposition activist has claimed that the number of arrests in the Kazakh capital, Nur-Sultan, amounted to 1,000 people on election day alone - the protests lasted until the inauguration of Kassym-Jomart Tokayev on June 12.

Turghymbayev’s figure indicates that the Kazakh authorities revised the figures and decided to disclose a more honest estimate.

Turghymbayev added that the majority of the detained protesters have already been released. However, 677 individuals were sentenced to up to 15 days in jail and another 305 were fined.

"Police did not use special equipment against the demonstrators. Neither tear gas, nor rubber batons, were used," Turghymbaev added. He maintained that the protests were “illegal”.

The United Nations Human Rights Office has called on Kazakh authorities "to respect freedoms of peaceful assembly, expression and the right to political participation" following the mass arrests.

The demonstrators protested against matters including the official results of the presidential election, which recorded Tokayev winning by a landslide - he got over 70% of the vote according to official figures.

The World Bank and the Agency for Strategic Planning and Reforms under the President of Kazakhstan organised a virtual roundtable that concluded that the country's ... more

Kazakhstan’s Damu Entrepreneurship Development Fund has received the Green Market Pioneer award from the 6th Annual Climate Bonds Awards 2021 for the issuance of the first ... more