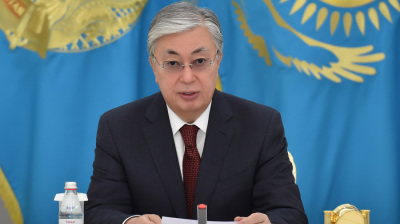 Kazakh President Kassym-Jomart Tokayev on July 7 ordered his government to diversify its oil supply routes, a day after a Russian court ordered the Caspian Pipeline Consortium (CPC) to suspend activity for 30 days, the president’s website said in a statement.

Kazakhstan is reliant on Russian pipelines for oil exports to Europe. A halt to the CPC pipeline, which supplies around 1% of global oil, would strain the oil market amid one of its worst supply crunches since the Arab oil embargo in the 1970s.

Tokayev also ordered a study into building a pipeline across the Caspian Sea, a previously proposed project that aims to carry Kazakh oil to Europe while bypassing Russia.

Tokayev did not explicitly mention the CPC pipeline, according to the statement.

The Russian court’s decision came after the Kazakh president pledged to help Europe restore its energy supplies. Observers have been speculating that Russia’s pressure on Kazakh oil exports is partly tied to Tokayev’s refusal last month to recognise Russia-backed Luhansk and Donetsk territories as independent states.

Also on July 7, two workers died and at least three more were injured due to an explosion at the Tengiz oilfield, Kazinform news agency reported.

The explosion occurred in a pipeline section during its testing. An investigation into the accident has been launched as per Section 3, Article 156 “Violation of Labour Protection Rules” of the Criminal Code of Kazakhstan, the report said.

Other local reports named Senimdi Kurylys as the contractor company carrying out the testing. The firm was working on pressure work at TCO with the aim of reaching completion by mid-2022.

The Tengiz field holds around 25.5bn barrels of oil, of which around 7bn-10bn barrels are recoverable. In 2021, Tengizchevroil (TCO), the operating company, reported production of around 534,000 barrels per day.

Viktor Orban’s latest move is another way of shifting the blame for economic woes following a procyclical and expansive fiscal policy in recent years.

A major battle is seen in Prague where the Pirate-led coalition of Mayor Zdenek Hrib could be brought down by a grand coalition of Babis' ANO, together with ODS, the prime minister's party.

Nearly 200 Azovstal soldiers were freed in the war’s largest prisoner swap on September 21. In exchange, Kyiv has given Moscow the Ukrainian oligarch and pro-Kremlin politician Viktor Medvedchuk and 55 Russian POWs.

Unrest that started as a demonstration against enforcement of compulsory hijab has become uprising against whole existence of Islamic Republic, say some observers.