Kazakhs vote to confirm removal of Nazarbayev’s grip on power 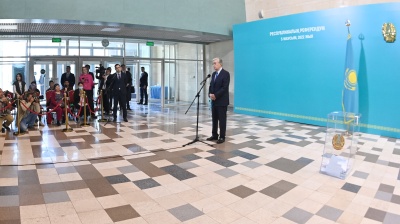 Kazakhstan's Central Election Commission said on June 6 that Kazakh citizens during the weekend referendum overwhelmingly voted in favour of constitutional amendments promoted by Kazakh President Kassym-Zhomart Tokayev as ending the “super-presidential” rule in the country.

Although Tokayev’s predecessor Nursultan Nazarbayev essentially lost his grip on his remaining power back in January and his family and allies have become more and more sidelined from influential positions since then, Nazarbayev retained the title of Elbasy, or Leader of the Nation, until June 5. The constitutional referendum officially removed the title along with the sweeping powers and the immunity it granted the former president of three decades and his family.

Tokayev, who also called for higher taxes on the extractive industries and on high-income individuals, proposed the reforms after ending the January unrest and putting down the associated coup attempt and removing former patron Nazarbayev and his entourage from important public sector positions. But many remain dissatisfied with the referendum - government opponents had called on Tokayev to postpone the vote, saying that people had not received enough time to study the proposals. 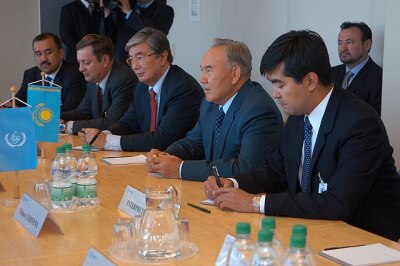 That was then: Nazarbayev (second left), pictured in 2004, sat next to Tokayev, his eventual successor who was for many years seen as his protege (Image: IAEA image bank, cc-by-sa 2.0).

Some even called for voting to be cancelled altogether. Police in Almaty detained on June 5 Kazakh activist Darkhan Sharipov. Sharipov said the referendum would achieve "partial reforms, not political ones."

RFE/RL reported that in some cities and districts in Karagandy Region many people at polling stations and in the streets did not understand what exactly they were voting for and what specifically would change in the constitution.

The drive to oppose the referendum was not entirely unfounded. Despite re-establishing the constitutional court and granting some more powers to parliament, the amendments still leave the main levers of power in the hands of the president.

The referendum may, nevertheless, bode well for future political activity in the country and help the public bring further pressure to bear on Tokayev as it sets out to ease the process of registering political parties in the country. Capitalising on Tokayev’s stated intention to remove the dominance of the ruling Kazakh party, Amanat, in parliament, many politically active Kazakh citizens may attempt to seize this opportunity to empower further democratisation. Several organisations and individuals who opposed Tokayev’s predecessor while he held sway have said they will form new political parties post-referendum.

That scenario includes a return to politics by Bolat Abilov, a prominent businessman and former opposition figure in Kazakhstan. There is also a declared intent to form a political party by a group in Kazakhstan involved in defending the rights of ethnic Kazakhs in China's severely repressed northwestern region of Xinjiang—the group has accused the Kazakh authorities of doing nothing to assist ethnic Kazakhs in Xinjiang who want to move to Kazakhstan. Kazakhs remain suspicious of just how closely interlinked Tokayev’s fortunes are with those of Vladimir Putin. They may soon get some idea of to what extent Tokayev is prepared to test the patience of Beijing.

Big boost for Western defence bloc as Madrid summit gets underway, with member states seeking to demonstrate unmistakable unity to Kremlin while the Ukraine-Russia war continues to rage.