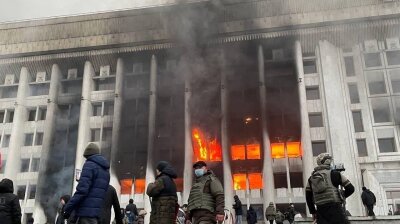 Kazakh President Kassym-Jomart Tokayev on January 5 confirmed he has requested military help from the Moscow-led Collective Security Treaty Organization (CSTO) of five ex-Soviet states. The Kremlin later stated that the security bloc would send "peacekeepers" to Kazakhstan where anti-government protests have got beyond the control of the regime.

Current CSTO chairman, Armenian Prime Minister Nikol Pashinian, said on his Facebook account that the alliance would send peacekeeping forces "for a limited period of time".

The CSTO is a regional security arrangement that groups Russia, Kazakhstan, Kyrgyzstan, Belarus and Armenia.

The protests could potentially turn very bloody. Unverified social media footage showed protesters being armed with machine guns and RPGs following a raid on an armoury in Almaty on January 5. There have also already been reports of troops "eliminating" protesters in central Almaty. Yesterday also saw the interior ministry confirm that eight police and National Guard officers have been killed in the clashes, while over 300 were said to have been injured.

The protests ignited at the weekend over a sudden price increase for liquefied petroleum gas (LPG), widely by Kazakhs to fuel cars. In the next two days the protests spread over the whole country but they have been particularly substantial in commercial capital and largest Kazakh city Almaty.

Tokayev quickly offered concessions to the protesters and reintroduced caps on the price of LPG and sacked the government, replacing the prime minister. But it quickly became apparent that the concessions were too little, too late as the protests became violent.

Several administrative buildings in Almaty were set on fire and over 190 people, mostly policemen, were hospitalised as the country’s riot police and security forces failed to take control of the situation.

Tokayev's tone hardened dramatically over the course of January 5 as the situation deteriorated. He claimed that the unrest was the work of “hooligans”, “financially motivated plotters” and foreign-trained "terrorist gangs".

Kate Mallinson, an expert on Central Asia at the foreign affairs think tank Chatham House in London, was on January 5 quoted by the BBC as saying that the protests were "symptomatic of very deep-seated and simmering anger and resentment at the failure of the Kazakh government to modernise their country and introduce reforms that impact people at all levels".

Tokayev said the same day that he had "appealed to the heads of CSTO states... to assist Kazakhstan in overcoming this terrorist threat."

Moscow has provided security assurances to all five other members of the alliance, including contributions to a combined Collective Rapid Reaction Force and Collective Rapid Deployment Force to tackle drug trafficking and terrorism.

Moscow has reportedly been readying forces to move into Kazakhstan. There have already been reports that Russian special forces participated in an operation to retake control of the airport in Almaty that was briefly captured by the protesters on January 5.

Analysts have questioned Russia’s ability to respond to the crisis as the troops that would normally travel to Central Asia from Russia’s Central Military District have largely been redeployed to the Western Military district near Ukraine.

CSTO units regularly hold joint exercises. Their latest manoeuvres in October were conducted in Tajikistan, Uzbekistan and Kyrgyzstan in the wake of the takeover of Afghanistan by the Taliban.

"Taking into account the appeal of the President of Kazakhstan, who expects the support of the CSTO in overcoming the established situation in Kazakhstan," Pashinian stated after a phone call Wednesday with Tokayev. "As the Chairman of the CPC Assembly Security Council, I am starting immediate consultations with the leaders of the CSTO countries."

Pashinian later added in a statement that there were "dangers threatening Kazakhstan's national security and sovereignty, which have arisen as a result of external intervention" and announced that a decision had been made to "send the CSTO collective peacekeeping forces to the Republic of Kazakhstan for a limited period of time in the country in order to stabilize and normalize the situation."

The CTSO is similar to the Nato security deal that contains the famous Article 5 clause that states that if one member is attacked then it is considered an attack on all members. Pashinian cited Article 4 of the CSTO agreement that says: "If one of the States Parties is subjected to aggression by any state or group of states, then this will be considered as aggression against all States Parties to this Treaty."

As the guarantor of security in Central Asia, the Russian Foreign Ministry is following events closely. There were unconfirmed reports that Nikolai Patrushev, the Secretary of the Security Council of Russia and former head of the Federal Security Service (FSB), flew to Kazakhstan on the night of January 4 when the protests broke out.  Patrushev flew to Minsk for consultations following the outbreak of the mass protests there in the summer of 2020.

The Russian Foreign Ministry has urged calm. "We are calling for a peaceful solution to all problems in the framework of the Constitution and the law, and dialogue, and not through street riots and the violation of laws," the ministry said in a statement.