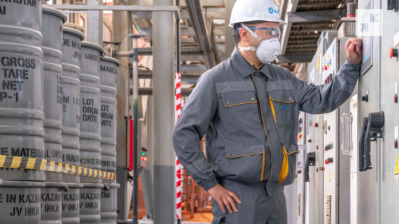 The world’s largest uranium producer, Kazatomprom, has resumed activities at all of its mining operations in Kazakhstan, progressing according to its plans after a four-month coronavirus-driven (COVID-19-driven) shutdown, FNArena has reported.

The company announced in early April that its facilities in Kazakhstan would gradually phase to overall reduced capacity, leading to production cuts by about 17.5% in 2020. The statement was made following a state of emergency declared in Kazakhstan due to the coronavirus outbreak.

The company originally expected production output to reach around 22,800 tonnes in 2020 before the announcement of the lockdowns and quarantine restrictions. Last week, Kazatomprom reported gross output in the third quarter at 4,660 tonnes, down from the 6,080 tonnes recorded in the same period of last year. The firm’s production guidance for 2021 stands unchanged.

Any new pandemic or weather-related issues at Kazatomprom's operations are not expected to influence 2020 production volumes, the company said in its quarterly update. It could, however, affect reserve development and production plans for 2021, the uranium producer noted.

VTB Capital Research, the analytical arm of the Russian investment bank VTB, said last week that the company results were 4% above its estimates. VTB analysts believed Kazatomprom was on track to achieve the upper level of its revised 2020 production guidance (19,000-19,500 tonnes).

“The company positively surprised [VTB] on sales volumes, as both consolidated sales and attributable sales exceeded our expectations by 70%, more than doubling QoQ and YoY,” VTB added in the note. “On our calculations, the large sales print on the back of reduced production suggests an inventory decrease of some 2ktU at KAP in 3Q20, implying an inventory balance of some 6.9ktU at the end of 3Q20, the lowest since 2016.

“The company nevertheless reiterated its 2020 guidance at 15.5-16.5ktU consolidated and 13.5-14.5ktU own sales. We think the surge in sales in 3Q20 reflects delayed demand from 1H20, which might help it to be on track to meet the upper bound of its sales guidance.”

VTB said that the reported results were supportive of third quarter earnings due to be announced on November 27.

Oligarchs trying to derail Ukraine’s privatisation programme, warns the head of Ukraine’s State Property Fund
9 hours ago
International Ice Hockey Federation (IIHF) has stripped Belarus of the right to hold the World Championship this year
11 hours ago
Russian opposition activist Navalny calls for supporters to take to the streets this weekend
21 hours ago
Armenia ‘to extend life of its 1970s Metsamor nuclear power plant after 2026’
18 hours ago
Turkcell denies any affiliation with $1.6bn loan in default extended by Ziraat Bank to Virgin Islands company
2 days ago