King of the castle: Gazprom overtakes Sberbank to become Russia’s most valuable company 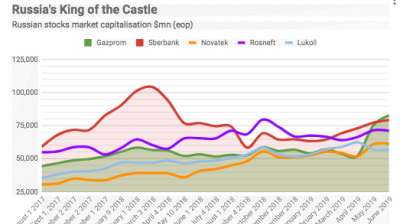 Gazprom shares jumped another 10% to make it worth $82bn and Russia's most valuable company
By bne IntelliNews June 4, 2019

The shares in Russia’s state-owned gas giant Gazprom jumped again, rising by 10% in a day, to make it Russia’s most valuable company, worth $82bn, as rumours of the imminent departure of CEO Alexi Miller swirled in Moscow.

The shares in the so-called “state within the state” already spiked by 30% in the last week of May as bne IntelliNews reported, adding $20bn to the company’s market capitalisation in a matter of days after the management hiked its dividend twice in a week: management announced it was increasing dividends from the RUB8 per share it has been paying for years to RUB10 per share, only to increase it again under pressure from the Ministry of Finance to RUB16.6 a few days later – effectively doubling the dividend payout to what is now a 27% dividend yield. The shares of Russia’s biggest companies are extremely under-valued because of management’s reluctance to share their profits with shareholders and their propensity to take all their spare money and plough it into the ground in the form of never-ending capex programmes.

Changes are afoot at the gas behemoth as it has seen several senior managers replaced recently and the government has also threatened to take direct control of its massive investment programme.  Investors have been wondering if the increase in the dividend payout this year is a one-off, but comments by the company since suggest that something more fundamental is happening.

“The market has reacted positively since the changes in Gazprom’s management and the upward revision to suggested dividends, which, at the time of the announcement, provided for a sizable DY of 10%. The company’s commitment (finally) to adopt the new dividend policy by the year-end and its stated intention to move to a 50% of IFRS net income payout in two-three years, have also been welcomed by investors. For now, though, we think that the market has started to price in further potential changes in corporate governance, providing ‘credit’ for them to the company in advance,” Dmitry Loukashov, oil and gas analyst for VTB Capital (VTBC), said in a note.

Shares of Gazprom grew by 4.14% as of June 3, driving the market capitalisation of the company to $82.bn (RUB5.38 trillion) and so overtaking the $79.8bn (RUB5.216 trillion) of Russian state-owned banking giant Sberbank, which had held the title of Russia’s most valuable company for well over a year. Gazprom shares are now up a huge 36% YTD, easly outstripping the 23% gain the leading RTS index has made in the same period.

As part of the general drive to “transform” Russia’s economy in the shape of President Vladimir Putin’s May Decrees and the associated 12 National Projects, the government has also clearly launched a drive to improve the efficiency at the state-owned enterprises (SOEs). Gazprom alone accounts for approximately 10% of GDP by itself and collectively the SOEs made up the bulk of Russia’s fixed investment in 2018.

Gazprom has been going through a management shake up in recent months as several senior and long-serving officials were replaced in May.

Since the end of February, three deputy chairman of the board have left: Alexander Medvedev (export), Valery Golubev (domestic market) and Andrey Kruglov, (financial unit). In April Kirill Seleznev, who runs Gazprom Mezhregiongaz’s sales subsidiary, also left the board. He is reportedly one of Miller’s closest allies. Further down the tree the the head of the capital construction department Sergey Prozorov and one of the main curators of the large-scale purchasing Mikhail Sirotkin have also left.

At the same time Gazprom vice-chairman Oleg Aksiutin announced plans to reform the company's corporate expenditures department that is responsible for the RUB1 trillion ($15.4bn) in spending on tenders and procurements. The changes were part of the company’s efforts to avoid losing control over its investments entirely after the government proposed in January to force all the SOEs to submit investment programmes for approval, and effectively take direct control over the capex programme.

As part of Aksiutin's drive to improve discipline a single contractor for Gazprom’s construction programme, Gazstroyprom, has already been set up and has already acquired the main assets of the former largest gas builder Ziyad Manasir and is now in talks to buy the construction assets from stoligarchs Arkady Rotenberg and Gennady Timchenko.

VEB (Vnesheconombank) has also reportedly been in talks with Rotenberg and Timchenko to take over their contraction assets as part of the Kremlin’s massive infrastructure spending programme under the national projects programme. If either of these deals go through that would represent a big change to the way the huge state backed investments into infrastructure are organised.

Gazprom is Russia’s most unproductive company according to a study by the World Bank, and was famously used as a piggy bank by its former management under Rem Vyakhirev that stripped billions out of the company for themselves and their cronies in the 90s. One of Putin’s first big battles after he took over as president in 2000 was to change the management at Gazprom, but now it seems that Miller, who took over, is falling out of favour and the Kremlin demands real reforms at the energy giant.

Rumours of Miller’s resignation have been doing the rounds on the market for years, but became louder since mid-May, reports The Bell. "Speculation on the market that Miller might be on the way out and transferred to run one of the regions have resumed," Citi analysts wrote in a note to clients shortly after the dividends were hiked on May 21, as cited by the Bell. Investors would be buoyed by Miller’s departure in the hopes that Gazprom perennial capex programme will finally be curbed and more cash returned to the government and minority investors in the form of dividends as a result.

Sacking Miller would be a revolutionary move on Putin’s part, almost as significant as his sacking of Vyakhirev, due to not only Gazprom’s economic power, but the role it also plays as a foreign policy tool. Some market participants said the recent spike in the company’s shares was an “insider trading deal” by well-placed government officials hoping to cash in on the further jump in shares that would inevitably follow Miller’s sacking. Government officials buying stocks shortly ahead of major announcements like big rating changes is common in Russia as officials in the know leverage their inside knowledge for profit.

However, rumours aside, the increase in dividend is enough to justify the increase in the share price. Investors have long complained that “investing into Gazprom shares is like buying a bond as the company pays out RUB8 per share come rain or shine,” Kirill Tachennikov, the oil and gas analyst with BCS Global Markets, told bne IntelliNews in a recent interview.

What investors really want to see is a change in dividend policy that means the company shares more of the billions of dollars a year it makes with investors.

Gazprom reported a 24% year-on-year gain in net income under IFRS to $8bn in 1Q19, despite revenues and Ebitda declining by 8% y/y and 13% y/y, respectively. Its Ebitda beat analysts' forecasts, mostly due to lower gas purchase costs and a sizable $2.8bn foreign exchange gain, VTB Capital commented on May 31. Gazprom has been selling record amounts of gas to Europe and with three new pipelines about to come onstream – Power of Siberia, Turkish Stream and Nord Stream 2 – its sales will only go up, while its capex should shrink considerably.

In theory that means more cash that can be paid as dividends to shareholders. The management promised as much during a conference call last week after releasing its results. The company said it is now working on a new dividend policy and it expects to finalise it and submit it to the board of directors for approval by the end of this year. Moreover, it promised the payout ratio of 50% "likely to be the ceiling in the new dividend policy," as cited on May 31 by Sberbank CIB, but also said the new RUB16.6 per share was now a floor for future dividend payments. 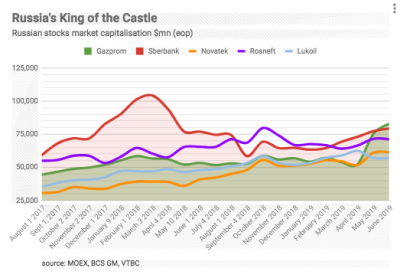