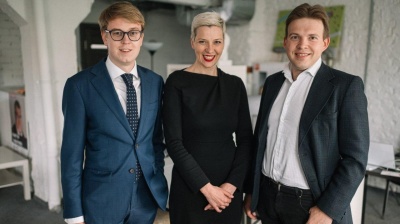 Belarusian opposition leader Maria Kolesnikova with lawyers Maxim Znak and Ilya Saley from the Coordinating Council. All three have been arrested on charges of planning a coup d'état.
By Ben Aris in Berlin September 10, 2020

Opposition leader Maria Kolesnikova has accused the Lukashenko regime of kidnapping her after she was jailed on charges of organising a coup d'état on September 9.

On the same day, former English teacher and nominal victor in Belarus’ presidential election Svetlana Tikhanovskaya appealed directly to the Russian people with a video message. In it, she calls for solidarity with the Belarusian people’s fight against Belarus' self-appointed President Alexander Lukashenko.

Kolesnikova disappeared on September 8 after eyewitnesses reported that she was snatched from the street in central Minsk by plainclothes men wearing masks who bundled her into a van. She reappeared 18 hours later at the Ukrainian border where the authorities’ attempt to forcibly expel her from the country failed after she ripped up her passport.

She is now in a pre-trial detention centre in Minsk in a cell with six other prisoners. Another two members of the newly established Coordinating Council were arrested on September 9: prominent lawyer Maxim Znak and Kolesnikova’s lawyer Ilya Saley.

“Maria Kolesnikova regards the events of recent days as abduction – a serious criminal offence – and together with her lawyer she intends to draw up appeals so that all those responsible for her abduction and forcible removal to the border are identified. Everything that Maria told the lawyer confirms the story of [her colleagues] Ivan Kravtsov and Anton Rodnenkov, who were forced to take Maria to Ukraine. Maria also faced threats of physical violence, which, being in the GUBOPiK building, could not be perceived as anything except as real. Maria also intends to file applications on the facts of death threats,” the Coordinating Council headquarters said in a statement.

She has been charged with "calls for a coup d'état" – according to paragraph 361 of Criminal Code – that carries a sentence of 2-5 years in prison if she is convicted.

Nobel laureate Svetlana Alexievich is now the only member of the presidium of the Coordinating Council still in Minsk and at liberty. Several European ambassadors went to stay in her apartment to try to protect her from arrest.

Lawyer Lyudmila Kazak met with Kolesnikova on September 9 and reported that she feels good and cheerful and is being held in the cell with the six other people.

“In the pre-trial detention centre, Maria received help: her blood pressure rose and her heart was worried. There are bruises on her body, her hands ache, as she was pushed into the car and held by force,” Kazak said, as cited by TUT.by. The lawyer intends to apply for a forensic medical examination.

Tikhanovskaya appeals to the Russian people

“[Tikhanovskaya] addressed the Russian people in a video address. She thanked independent media and bloggers for support; she asked for people not to trust Kremlin's propaganda and to speak to ordinary Belarusians,” Franak Viacorka, a local journalist, said on Twitter.

A poll conducted this week by a Russian state-owned pollster, the Russian Public Opinion Research Centre (VTsIOM), found that 42% of Russians were against a merger of Russia and Belarus, saying that they preferred to just keep “brotherly” relations. Another 22% approved deeper economic integration; 17% thought Belarus should become a region of Russia and 1% said that Russia should become a region of Belarus.

Lukashenko, meanwhile, continues to ratchet up his counter-initiative against the opposition. The independent news outlet TUT.by came under more pressure as of September 9 after authorities formally warned it for publishing “wrong” information.

“#Belarus. Popular independent on-line news outlet @tutby received another warning for publishing "misleading" or "wrong" information. (No point elaborating.) Now they can be closed at any moment of time,” Ihar Filipau, a PhD candidate that follows Belarus, tweeted.

Earlier this week the journalist daughter of the editor of TUT.by, Valeriya Ulasik, was arrested by security forces after they raided the pair’s apartment. The authorities regularly put pressure on prominent opposition figures by attacking or threatening their children. The latest attacks on TUT.by are part of Lukashenko’s escalating disinformation campaign.