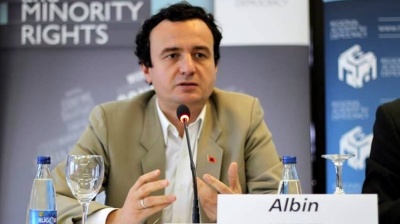 Kosovo’s Vetevendosje and the Democratic League of Kosovo (LDK) signed an agreement on forming a new coalition government on February 2 after months of talks over the distribution of top positions.

Kosovo held snap general elections on October 6 2019 after Prime Minister Ramush Haradinaj resigned in July as he was invited to appear at a war crimes court in The Hague.

Vetevendosje leader Albin Kurti was named PM-designate by President Hashim Thaci on January 20. Vetevendosje won 29 seats in the 120-seat parliament, while the LDK gained 28 seats. They will be supported by several MPs from minority groups representing ethnic Serbs, Turks and other minorities.

Kurti and the head of the LDK Isa Mustafa confirmed they signed the deal at a news conference in the parliament where MPs will vote on new cabinet on February 3. The government needs the support of 61 MPs.

“The time has come for an agreement, now we have an agreement. We will govern together,” Kurti said in a tweet.

Mustafa said he expects the agreement to be in the interest of Kosovo.

Vetevendosje made a few concessions to reach a deal with the LDK. Glauk Konjufca from Vetevendosje who was elected speaker of the parliament on December 26 stepped down to vacate the position for a LDK member. Konjufca is expected to be the new foreign minister.

Mustafa confirmed that he agreed the negotiations on proposing a new president after Thaci's mandate expires in 2021 will be discussed at a later stage, according to Gazeta Express.

However other media reported that Vetevendosje has already agreed that the new president will be from the's LDK ranks when Thaci's mandate expires. The question of who gets to appoint the next president was one of the main stumbling blocks in the negotiations on forming a new government.

Kurti confirmed that the new cabinet will have 15 ministries and not 12 as earlier agreed by the two parties. The names of the ministers were not revealed.

One of the biggest challenges of the new government will be to reach a deal with Serbia on the normalisation of relations between Belgrade and Pristina that is crucial for both countries on their EU path.

Kosovo declared independence from Serbia in 2008, but is still not recognised by Belgrade as a separate country.