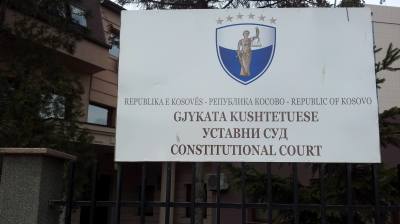 By Valentina Dimitrievska in Skopje May 31, 2020

Kosovo’s Constitutional Court ruled late on May 28 that a new government can be formed without the need for new elections, sparking outrage in the Vetevendosje party that won the October elections and currently leads the outgoing cabinet.

The government led by Vetevendosje’s Albin Kurti was ousted on March 25 when it lost a no-confidence vote triggered by his coalition partner, the Democratic League of Kosovo (LDK), after the two parties clashed on key issues. The Constitutional Court decided at the end of April to temporarily halt a presidential decree to appoint a new prime minister-designate, Avdullah Hoti, from the LDK, until May 29 following a request from Vetevendosje.

The highest court in Kosovo has now ruled that President Hashim Thaci’s decision to give a mandate to the LDK, which was second ranked in the October 2019 election, was in line with the constitution.

The court said that after the no-confidence motion there were two constitutional and legal possibilities. First, for the party that was the election winner to form a new government, and if the party rejected the offer, the right to form a government passes to the parliamentary group that, according to the president, has the best chance to do so in order to avoid elections. Only if neither of the two scenarios succeeds is the president is obliged to call elections.

Vetevendosje argues that Thaci violated the constitution by giving a mandate to the second-ranked party in the October election, the LDK, and said that the only constitutional move following the no-confidence motion that ousted Vetevendosje is holding new elections.

Outgoing Prime Minister Albin Kurti commented on the decision of the Constitutional Court in a Facebook post, saying that the ruling is unfair and unacceptable. “We will inform the citizens about the other political steps in the coming days,” Kurti said.

On May 28, before the court’s decision was published, protesters supporting Vetevendosje took to the streets of Pristina calling for new elections and against Thaci’s decree to give mandate to Hoti.

Officials from Vetevendosje also announced they will launch an online petition to hold elections. Local media warn the decision of the highest court will lead to protests by supporters of Kurti's party.

Gazeta Express reported that a call for demonstrations throughout Kosovo has already appeared on social networks due to Kurti’s removal from the post of prime minister, and that June 5 was set as the protest date.

On the other hand, Thaci welcomed the decision of the Constitutional Court, stating that he was convinced that every step he took was in accordance with the constitution. He added that Kosovo faces many challenges and therefore no time should be wasted to form a new government.

The president of the LDK, Isa Mustafa, said the Constitutional Court's ruling proves that "the state and justice" work.

Hoti welcomed the decision of the Constitutional Court and said that "it is time for us to unite for the future of the state and our citizens."

The US and EU called on institutions and political parties to implement all decisions of the Constitutional Court.

The European Parliament's special rapporteur for Kosovo, Viola von Cramon, said in a tweet that there was no alternative but to accept this court decision and that changes should be sought only in the next elections.

LDK officials announced that the party is awaiting the full verdict of the Constitutional Court, so that they can continue working for the establishment of a new government. The parliament session is expected this week.

Kosovo's government decided on July 12 to tighten measures to prevent the spread of the coronavirus (COVID-19) epidemic after the number of people infected spiked in the last few days. Kosovo ... more

Pristina mayor Shpend Ahmeti said on June 25 that Serbian state-owned telco Telekom Srbija has placed the highest bid worth €155mn to acquire its Kosovan peer IPKO Telecommunications, but that ... more