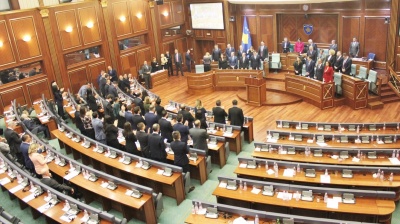 Kosovo’s parliament endorsed the new cabinet led by PM Albin Kurti on February 3, the day after Vetevendosje and the Democratic League of Kosovo (LDK) announced their long-expected coalition deal.

The two parties, which were previously in opposition, were engaged in difficult talks to form a government, often with disagreements over the distribution of top positions.

Vetevendosje won 29 seats in the 120-seat parliament in the October 6 snap elections, while the LDK gained 28 seats. They are supported by several MPs from parties of ethnic Turks, Bosniaks and Roma.

The government was voted in by 66 MPs while 10 abstained.

The parliament session began with the presentation of the government programme by Kurti, the leader of Vetevendosje. For the following three hours, the opposition criticised the new government. The opposition parties then left the session before the vote.

The government will have 15 ministries, six of which belong to Vetevendosje, the same number to LDK and three to minority parties.

Minister of foreign affairs will be Glauk Konjufca from Vetevendosje, while minister of internal affairs is LDK vice president Agim Veliu.

The minister of justice is Albulena Haxhiu and minister of European integration, Blerim Reka.

There will be three ministers from minorities’ parties: Emilija Redzepi for local self-government, Dalivor Jevtic for communities and returns and Ivan Milojevic for regional development.

Under the agreement between Vetevendosje and the LDK, the cabinet will continue the dialogue with Serbia with the sole aim of securing recognition of Kosovo by Belgrade. Changing of borders and the exchange of territories will not be discussed, while the 100% tariffs on Serbian products imposed by the previous government will remain in place until the recognition of the state by Serbia.

In connection with the dialogue with Serbia, the new government stated that talks will no longer be led by President Hashim Thaci, but by Kurti.

The Community of Serb Municipalities (ZSO) will have no executive authority under the programme of the new government.

The Vetevendosje-LDK coalition deal envisages a full revision of the agreements reached so far with Serbia to see the level of their implementation by Belgrade and these issues will be raised at the negotiating table in cooperation with the EU.

The state budget under the new cabinet will be completely reoriented from unnecessary spending towards projects that directly reduce unemployment, with a focus on tackling youth and women's unemployment, improving education, health and the military.

Serbian Prime Minister Ana Brnabic said earlier on February 3 that the Serb List, the main party of ethnic Serbs living in Kosovo, will not support the new government.

She also said that Serbia will allocate €150mn to support projects for the benefits of Serbs in Kosovo.

Kosovo declared independence from Serbia in 2008, but it is still not recognised as a separate country by Belgrade.