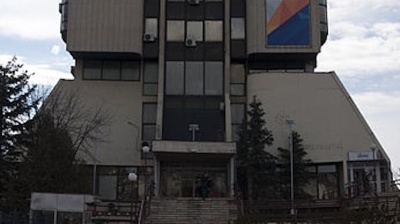 By Valentina Dimitrievska in Skopje July 23, 2020

Employees of Kosovo Telecom held a protest in front of the government in Pristina on July 23, fearing possible bankruptcy due to the company's blocked accounts, local media reported.

Kosovo Telecom’s accounts were frozen on July 15 following a Pristina court's decision to allow a private enforcement agency to recoup millions of euros in compensation ordered to be paid to local virtual mobile operator Z-Mobile by an international arbitration court in 2016.

The interim board of Kosovo Telecom also resigned following the dispute with its main shareholder, the Kosovan government, over the handling of the debt to Z-Mobile.

During the protest, the head of Kosovo Telecom’s trade union, Lamih Balaj, urged Kosovan deputies and the government to take responsibility for the situation at Telekom and save the company.

The protest ended after Balaj met with Prime Minister Avdullah Hoti, who promised that no one at Telekom will lose their jobs.

Balaj was cited by broadcaster RTK as saying that Hoti also said the issue of Telecom is the responsibility of the government and demanded that protests end and workers return to their workplaces.

On July 21, Kosovo’s Economy Minister Blerim Kuci stated that the board’s refusal to pay the debt to Z-Mobile left no room to find a solution.

“This behaviour from the board risks closing the door to a solution, and will send Kosovo Telecom into a financial crisis,” Kuci wrote in a Facebook post.

Halil Krasniqi, former technical director of Kosovo Telecom, has warned that if the company halts operations and cannot provide services, telecommunications at Kosovo’s key state institutions are at risk, including the police and other emergency services, Pristina Insight reported.

The reason for the dispute between Kosovo Telecom and Z-Mobile is their mutual contract signed in 2009.

Z-Mobile, owned by the Devolli Company, accused Kosovo Telecom of failing to provide sufficient SIM cards and 3G and 4G services in breach of the contract. In December 2016, the London Court of International Arbitration ruled in favour of Z-mobile and obliged Kosovo Telecom to pay around €26mn in compensation.