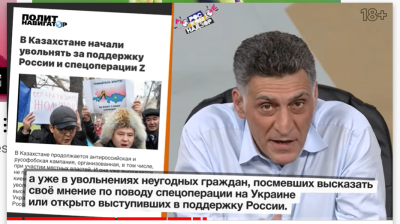 For those Kazakhs anxious that Vladimir Putin might one day expand his territorial ambitions to snatching at least parts of Kazakhstan, the past week brought unsettling words from a prominent Russian talk show anchor, who made it clear to viewers that the Central Asia nation could indeed meet the same fate as Ukraine.

Railing at Kazakhstan for scrapping annual WWII victory commemoration parades, Tigran Keosayan – whose wife, Margarita Simonyan, is editor-in-chief of the Kremlin-run broadcaster RT and heads the Rossija Segodyna state media holding – said on his YouTube channel on April 24: “Kazakhs, what kind of ingratitude do you call this. Look carefully at what is happening in Ukraine… If you think that you can get away with trying to be so cunning, and imagine that nothing will happen to you, you are mistaken. The world has changed, everything has changed.”

Clearly riled, Kazakhstan was not slow to react. Kazakh Foreign Ministry spokesperson Aibek Smadiyarov on April 27 described Keosayan’s comments as “insulting” and lacking in objectivity and said a decision was pending on whether to declare him persona non grata.

“Perhaps his statement reflects the views of a certain part of the Russian public and the political establishment, but it in no way abides by the spirit and nature of co-operation between our countries,” Smadiyarov wrote on his official Telegram channel.

Just under a fifth, or 3.5mn, of the population of ex-Soviet state Kazakhstan are ethnic Russians. They largely live in the north of the country, which has a border with Russia that runs for 7,600 km. Kazakhs nervous that Moscow will one day decide to carve up their country were left even more jittery by the outcome of events in January, when Kazakh President Kassym-Jomart Tokayev responded to mass civil unrest – as well as to what some observers predicted would develop into a coup against him driven by disloyalty towards his administration among the armed forces and security services – by inviting into Kazakhstan Russian and other troops of the Russian-led CSTO military bloc.

However, Tokayev’s administration has not shown anything like fealty to Russia since the Ukraine invasion began in late February. Though Nur-Sultan has not condemned Russia’s attack on Ukraine, it has called for a swift resolution of the crisis in line with the United Nations charter, has said it will abide by Western sanctions against Moscow and has sent humanitarian aid to the Ukrainians.

Keosayan, one of the Kremlin’s most aggressive attack dogs, also said during his show that Kazakhstan as a “fraternal nation” should “take a side” in what he claimed was a proxy war between Russia and Nato nations. Those that take an ambiguous position could be considered foes by Moscow, he added. The Kazakhs, he implied, were ungrateful to Russia for its help in putting “a stop to the mess” that took place in January.

Febrile atmospheres develop during war-time, emotions run high, rhetoric runs out of control in all directions. Yet if the argument is that all the accumulated anxiety amounts to little more than Kazakh paranoia, it was Putin himself who set fears in motion back in 2014, shortly after Russia’s annexation of Crimea. Remarking that historically “the Kazakhs never had statehood”, he gave then Kazakh president Nursultan Nazarbayev a backhanded compliment for creating “a state on a territory where there had never been a state”.

With the world still in shock at the brutality that has been unleashed in Ukraine – a top US official this week even accused Putin of a level of “depravity” that no-one saw coming – voices in Moscow that were once thought fringe are now perhaps taken more seriously by Russia’s post-Soviet neighbours. In January, the head of Russia’s Communist Party, Gennady Zyuganov, called on Putin to "liberate Russian-speaking people in North Kazakhstan". Since then he has been accused of spouting misinformation about Kazakhstan, falsely accusing the Kazakhs of a mass closure of Russian-language schools in the south of the country and of allowing the Americans to set up nine bio-weapons labs.

Kazakhstan may need some reassurance, but it looks like Putin’s days of reassuring visiting leaders he has no designs on restoring the Russian Empire are over.

Kazakhstan’s food security hopes for the world undermined by food insecurities at home
NEO: Why copper mining must clean up its act
Kazakhstan: What next for restive mining village?

Kazakhstan’s food security hopes for the world undermined by food insecurities at home
7 hours ago
NEO: Why copper mining must clean up its act
10 hours ago
The birth of a Kazakh banking empire: ATF Bank
1 day ago
CEPR's action plan for Ukraine's wartime economy
1 day ago
Missiles or sabotage: What caused the explosion at the Russian airbase in Crimea?
4 days ago