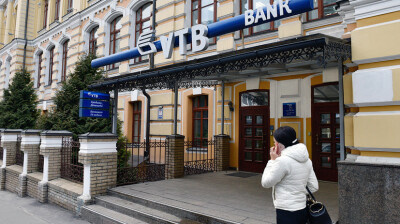 Russians stampeded into foreign stocks last year, egged on by aggressive advertising and a desire to invest their savings into something a bit "safer" than Russian equity. As a result of sanctions on VTB their investments have now all been frozen. Retail investors are now suing the bank. / wiki
By Jason Corcoran in Dublin July 6, 2022

The claimants, who have invested in a range of US blue-chip stocks including Tesla, Apple and Netflix, have exposure of about $10m at stake but that amount – and the number of investors involved – is just the tip of the iceberg.

Central Bank data shows foreign stocks and bonds accounted for a 31% of all Russian brokerage assets at end of last year after retail investors were hammered by advertising to dip their toes in hot US tech stocks.

The class action is being co-ordinated by German lawyer Max Gutbrod and Boris Feldman, a co-founder of Moscow firm Destra Legal.

“As soon as the invasion happened, VTB got an announcement it would be sanctioned within a month,” Gutbrod, a former partner of over two decades at Baker & McKenzie in Moscow, told bne IntelliNews in an interview. “So VTB sold whatever foreign shares they had. As for all the shares they had in trust, they decided they were allowed to transfer those shares to another depositary, which they are not.”

VTB’s brokerage allowed the domestic investors access to foreign shares via their own trading platform. Instead of informing their clients of an imminent problem, Gutbrod says VTB did nothing and transferred the shares to a depositary, where they were duly sanctioned and frozen.

Gutbrod said the Russian investors were effectively collateral damage in "a quid pro quo" after the West seized half of Russia’s $630bn in foreign reserves following the invasion of Ukraine on February 24.

“VTB has not provided adequate protection for their investors,” added Gutbrod. “They should have been informing the investors and giving them the choice to sell their stock – like VTB did. The only problem is proving the losses because you don’t fully know whether the investors would have ultimately sold.”

From communicating with the investors, Gutbrod said a majority of them definitely would have sold the shares. He said: “That becomes a question of proving it and whether the court will accept that. Our strategy on that side is to try to get the Central Bank or a state entity to compensate, because the problem is so big.”

During the pre-war boom in retail stock market investment, Russian brokers had been aggressively pushing foreign shares and investors had queued to sign up. In the second quarter of 2020, foreign investments totalled RUB0.3 trillion but surged to almost RUB1 trillion by the end of 2021, according to CBR data.

Citing the need to protect investors' rights and interests, the Central Bank said it had decided from May 30 to restrict trading in foreign shares that have been blocked by international clearing houses, except for shares of foreign companies that carry out "production and economic activity mostly in Russia."

The move affected all securities whose storage and settlement executed via the National Settlement Depository with the exceptions for foreign stock issued by Russian firms, such as Yandex, Ozon and TCS Group.

Prior to the invasion, investor protection and enhancing corporate governance standards would have been major priorities for Central Bank Governor Elvira Nabiullina.

However, Gutbrod accepts that the regulator is now trying to put out so many fires that protecting minorities will be far down her agenda.

“On a medium term, they are going to need to get a local capital market going,” he said. “However, one of the biggest hindrances will be continued ill-treatment of retail investors in all kinds of circumstances in 1998 and in every crisis since.”

The invasion and subsequent sanctions have been ruinous for Russia’s domestic capital markets and for liquidity in local shares and bonds. Insiders said the market’s development has been retarded by decades, while many foreign investors and their existing investments may be stuck for even longer.

Foreign investors in local Russian stocks have also been caught in the crossfire. Non-residents have been prevented by the Central Bank from selling assets on the Moscow Exchange since February 28.

On June 6, VTB also announced the termination of its depositary receipts (DR) programme in the wake of US and international sanctions. Following termination of the DR programme, VTB’s own listing at the London Stock Exchange (LSE) will be also terminated.

In further nails to the local market's coffin, foreign brokers were banned and dividends by Gazprom and Sberbank were also axed, which sent both blue-chips into a downward spiral.

The investor base involved in the class action ranges from high-net worth individuals with $1mn at stake to modest retail investors with $1,000-$2,000 on the line, according to Gutbrod.

“The impression I am getting is that they are very diverse – from the retail investor who puts his last money on something as glossy as share in April after reading some advertisement to pretty sophisticated investors.”

Gutbrod believes that the counter-sanctions to confiscate shares may not even be legal. “This legislation is not even in place for here or seizing oligarch yachts in Italy,” he said.

The next target for the lawyers is Otkritie Bank, which was previously bailed out by the Central Bank. A similar number of clients are believed to be affected with the number of claims rising daily.

“All the major banks and brokers have a similar problem, and our claim represents just a small part of the overall number of investors affected,” said Feldman. “Some like Sovcombank sent out a warning notice and recommendation to sell the stock once they got sanctioned but not most of the others.”

Andrei Kostin, the former Soviet diplomat who runs VTB, last month said sanctions had frozen "billions of dollars" of its assets, but the lender still had the funds to buy bailed out rival Otkritie.

Russian inflation falls again to 14.9% in August, fears of a deflationary spiral grow
The economic war with Russia has already cost the West $380bn
GUSTAFSON: Vlad – What's your problem with gas turbines?

The economic war that the West launched against Russia in the days following the invasion of Ukraine has already cost developing nations $379bn, analysts estimate.

The sudden exit of the Western companies, because of sanctions, leaves the modernisation of the Russian electricity sector in the lurch. Russia cannot make its own gas turbines that are at the heart of every power station.