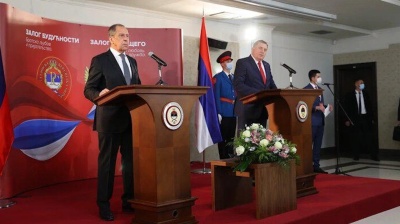 Ukrainian Foreign Minister Dmytro Kuleba has accused Milorad Dodik, the Serb member of Bosnia & Herzegovina’s tripartite presidency, of lying about the scandal surrounding an icon that the president gave to Russia’s Foreign Minister Sergey Lavrov during a visit in December.

Dodik, a staunch advocate of closer ties with Russia, presented Lavrov with a Ukrainian icon, which provoked a furore as Ukraine claimed the icon might have been stolen by mercenaries in the Russian-occupied Ukrainian city of Luhansk.

“Serbian member and chairman of the presidency of [Bosnia], Milorad Dodik, presented the minister of foreign affairs of the Russian Federation, Sergey Lavrov, with a 300-year-old gilded icon, which was found in Luhansk,” says a press release from Dodik’s party, the SNSD, issued during Lavrov’s visit to Bosnia.

Although Dodik claims the Orthodox icon had been in his family for years, Russia returned it shortly after Ukraine raised doubts about its origins.

However, Dodik returned to the issue on January 5, claiming that Ukraine had not made any complaint regarding the icon and the scandal had been made up by officials from Bosnia’s Muslim-Croat Federation, one of Bosnia’s two autonomous entities.

“Ukraine has never raised the issue of the disappearance of that icon. It is a family icon. Even today, the government bodies have not asked for that icon,” Dodik told reporters as quoted by N1.

This was swiftly denied by Kuleba. “The Ukrainian icon even burned the hands of experienced cynical Russian diplomats who disowned it. But Mr. Dodik continues to lie, surpassing his older friends. Ukraine continues to demand the return of the icon,” Kuleba wrote on Twitter on January 6.

Kuleba was backed up by the Bosnian prosecution, which has launched an investigation into how the icon was imported to Bosnia. Prosecutors confirmed that Ukraine demanded an explanation shortly after Dodik presented it to Lavrov.