KYIV BLOG: Zelenskiy’s honeymoon is over as his first year in office comes to an end 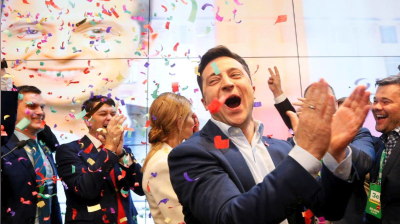 Ukrainian President Volodymyr Zelenskiy’s honeymoon has definitively come to an end, as he has struggled to get two bills through the Rada – the land market bill and the so-called anti-Kolomoisky banking bill – to avoid facing a cataclysmic default on the country’s external debt.

Zelenskiy has been riding on a wave of popular optimism ever since his election on April 20, a year ago next week. He coasted to victory with a landslide 73.2% of the vote, crushing his opponent and incumbent Petro Poroshenko in the first round, who won 24.4%.

Now Zelenskiy's support in the Rada is waning, as his own faction, which also won a landslide victory, is fragmenting. At the same time he now also finds himself in open conflict with his mentor and the sponsor of his presidential campaign, oligarch Ihor Kolomoisky.

Zelenskiy’s popularity has been reduced but he still retains more support than any other senior politician; however, the compromises he is now being forced to make will continue to undermine his popularity.

Zelenskiy’s popularity was at 46% in late March, a slight dip compared to February (48%) but a pretty stable trend since a sharp fall in December from a still giddy 60%, according to a poll released by the Kyiv International Institute of Sociology (KIIS) recently.

All these issues were highlighted by the recent votes in the Rada on the two key pieces of legislation. Neither of the two bills is popular. Both are essential if Ukrainian is to secure a new deal with the International Monetary Fund (IMF). And without fresh donor money Ukraine will almost certainly default on its debt and end up losing a decade like Russia did in the 90s. The cost of default for a country already reeling from the war with Russia in the Donbass and the stop-shock of the coronavirus (COVID-19) epidemic would be exorbitant.

Both bills were passed in the first reading during a special session on March 30 but both are heavily laden with compromise. First, the banking bill only just squeezed through, earning 227 votes in the 450-person parliament, despite the fact that Zelenskiy’s faction is 248 strong. That means despite Zelenskiy's call on his faction ahead of the vote, many of his deputies rebelled.

So many rebelled that in the end the bill only passed after former President Petro Poroshenko’s European Solidarity faction and the Golos faction of Ukrainian musician Svyatoslav Vakarchuk added some of their votes to the tally.

Oligarch Ihor Kolomoisky, the former owner of Privatbank, has launched a sustained attack on the government in his efforts regain control of Privatbank, which was nationalised in 2016. In May 2019 the NBU lost a court decision to reverse the nationalisation of Privatbank.

At this stage it appears that Kolomoisky's motivation is not so much as to make even more money after he stole some $5.5bn from Privatbank, but simply to stop the legal cases being brought against him by the now state-owned Privatbank management to recover this money. Privatbank has already won an important decision in the London courts in April that saw $2bn of Kolomoisky's assets frozen, and has recently launched another case in Cyprus to recover $5.5bn. IMF says a total of $15bn has been stolen from banks during the reforms of the last six years, half of that by Kolomoisky alone.

Zelenskiy now finds himself between a rock and a hard place, where whatever choice he had in making up the reform agenda has evaporated as the economy slides into crisis following the double whammy of oil price shocks and the pandemic. That has put him into open conflict with Kolomoisky. Whatever Zelenskiy's original intension was to cater to Kolomoisky’s desires, he now has no choice but to do exactly what the IMF tells him to do or face an economic disaster.

At the same time Zelenskiy needs to rely on his political foes in the Rada – and Poroshenko is chief amongst them – and this has undermined his stance as the “new guy” that doesn't belong to the political elite and was going to be the clean sweeping brush of change. For his part, Poroshenko’s motivation to vote with Zelenskiy's faction on the bank bill can be attributed to the animosity the two fellow oligarchs have long had towards each other.

The land bill is supposed to create a land market that should suck in billions of dollars of investment that would see the agricultural sector – one of Ukraine’s biggest export earners – flourish as well as earn the state significant new revenues.

As it was, the bill that was finally approved will do none of that. It limits the size of plots to 10 ha and only private citizens can buy. Laws to cover the corporate buying and selling of land will be worked out later. And laws on selling land to foreigners will have to be put to a referendum.

Even in this watered down version the bill to create a land market is highly unpopular. A recent poll by KIIS found that 60% of those surveyed did not support the Rada’s decision to pass the land market bill. When asked how they would vote in a hypothetical nationwide referendum on agricultural land sales, 74% of respondents said they would vote against opening up the market.

Ukrainians are even sceptical about co-operating with the IMF: only about a third of respondents believed it would be best for Ukraine to submit to a new IMF programme to secure new loans, while another 46% do not think IMF co-operation is the right way to go.

According to Ukrainian journalist Konstantin Skorkin in an analysis for Carnegie Moscow, Zelenskiy had no other option but to get these laws approved and that meant that he had to pay a large political price.

Zelenskiy’s attempt simultaneously to push through the anti-Kolomoisky bill and the land bill was met with even greater resistance from within his own party.

“Poroshenko’s unexpected transformation into some kind of constructive opposition amid the schism in Servant of the People is very dangerous for Zelenskiy, who has built an image for himself as someone who is there to correct the mistakes of his predecessor,” Skorkin said.

“Struggling to hold on to his party’s majority, Zelenskiy is increasingly forced to take heed of the influential national-patriotic minority in Parliament,” Skorkin continued. “Zelenskiy finds himself held hostage by the old elite, from whom he is buying the last chances for reform at the cost of his own political future.”

KYIV BLOG: IMF to Ukraine: here is the money but we don't trust you

KYIV BLOG: Rada deputies undermining Ukraine’s investment case yet again with planned reforms to the OVDP local bond market
KYIV BLOG: IMF to Ukraine: here is the money but we don't trust you
KYIV BLOG: Has Zelenskiy broken with Kolomoisky?