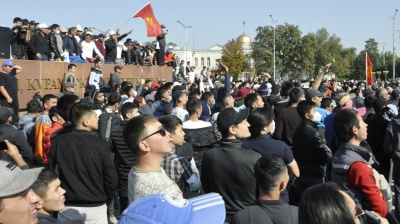 The rally in central Bishkek drew around 5,000 protesters.
By Muzaffar Ismailov October 5, 2020

Kyrgyz police deployed tear gas, stun grenades, rubber bullets and water cannons on the evening of October 5 as protests erupted in Bishkek over allegations of vote-rigging in the previous day’s parliamentary election. The capital saw the largest demonstration with around 5,000 protesters in the main square, while rallies were also held elsewhere in the Central Asian nation including in the northern city of Talas and the central region of Naryn.

Gunshots could be heard as riot police with dogs, backed by several vehicles, moved into the central square in Bishkek, Ala-Too Square, after some protesters tried to break through the gates of the parliament, known as the White House. The protesters were violently dispersed from the square, after which police pursued various groups down side streets, news agencies reported.

In the election results, only four parties out of 16 passed the 7% threshold for entry into parliament, three of which have close ties to President Sooronbai Jeenbekov. International monitors said the claims of vote-buying and intimidation were "credible" and a cause for "serious concern".

The country's opposition parties declared that they would not recognise the results of the election. Some protesters called on Jeenbekov to resign. The presidential press service released a statement saying that Jeenbekov planned to meet on October 6 with the leaders of all 16 political parties that took part in the election.

Opposition candidates are calling on the Central Electoral Commission of Kyrgyzstan to waste no time in scrapping the results of the vote. The BBC reported that one candidate, Ryskeldi Mombekov of the Ata Meken party, told a crowd of more than 5,000 protesters: "The president promised to oversee honest elections. He didn't keep his word." Ata Meken said it had been confident of winning seats in parliament, but ended up as one of the parties that missed the entry threshold. Ata Meken leader Janar Akaev reportedly suffered a leg injury in the protests, while two police officers were said to have also been injured.

Thomas Boserup, head of the Organisation for Security and Cooperation (OSCE) in Europe's election observation mission, briefed reporters that although the vote was "generally well organised", the claims of vote buying were a "serious concern".

In the official results, the two leading parties, Birimdik and Mekenim Kyrgyzstan, received just short of a quarter of the vote each, though, given splits that hit their previous ruling alliance, it is unclear if they will be able to form a governing coalition.

Jeenbekov's younger brother, Asylbek Jeenbekov, is in Birimdik. Mekenim Kyrgyzstan is viewed as closely connected to the powerful Matraimov family. The family's figurehead, Rayimbek Matraimov, was the target of anti-corruption protests last year. He is thought to have helped finance Jeenbekov's successful presidential campaign in 2017.

RFE/RL reported that as the evening wore on some clashes in Bishkek were ongoing near Government House with sporadic shootings as protesters tried to go back to Ala-Too Square. Bishkek hospitals, it added, said that they treated 16 patients who sustained injures during the violence.

Akaev and the leader of Respublika, Mirlan Jeenchoroev, announced at the earlier Bishkek rally that leaders of 12 parties in all had signed a petition requesting that the Central Election Commission annul the official results of the votes by midnight. According to the two politicians, the leaders of two parties, Mekenchil (Patriot) and Butun Kyrgyzstan (United Kyrgyzstan), which won seats in the election, were signatories of the petition.

The election commission said the final results of the poll would be announced in 20 days.