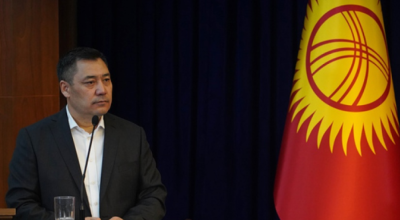 The large debt Kyrgyzstan has accumulated to neighbouring China has raised fears the country may have to hand over lucrative assets if it fails to meet its repayment obligations.

Kyrgyzstan’s foreign debt as of the end of February 2022 amounted to $5.1bn, including $817.3mn in domestic and $4.3bn in foreign debt, according to the Kyrgyz foreign ministry.

42% of that ($1.8bn) is owed to the Export-Import Bank of China for a series of infrastructure projects over the last decade under the Belt and Road Initiative (BRI), Chinese leader Xi Jinping's signature foreign-policy project.

If $200mn were enough to settle the debt payment owed to China in 2020, the country will need to find at least twice that by 2024.

Bishkek, however, is grappling with a contracting economy, prompting fears the country will be unable to pay off its loans or even meet interest payments, especially on the Central Asian country’s commitments owed to Beijing.

Not one hour behind

Amid the growing debt pressure, the authorities seem aware of the urgency of making their payments to China. Officials say Kyrgyzstan fulfils all its obligations to foreign creditors on time and in full, with President Sadyr Japarov promising not to delay foreign debt repayment even for ‘one hour’.

This year the cabinet plans to pay $111mn to Eximbank. According to the Kyrgyzstani Ministry of Finance's projection, an increase in servicing the state external debt to Eximbank will begin in 2025 and reach its peak in 2027, followed by a decrease.

Highlighting the political sensitivity of Kyrgyzstan’s debt burden, politician Ravshan Jeenbekov told journalists on July 2 that he had been detained and interrogated by police after claiming on social media that the government plans to raise the country’s external debt by $1.3bn. Japarov later denied Jeenbekov’s claims.

At the beginning of July, Japarov commented on the country’s huge foreign debt. “This year we have to repay the external debt of $289mn. Next year we will pay the debt of $291mn. Thus, over the next 10 years, we will repay debts accumulated over 30 years. If we don’t pay it, we will lose our statehood. We took credits and stole half of them. I don’t think that anyone has ever said that we were facing the threat of losing our statehood,” Japarov said.

Chinese investments in the region have often met criticism for facilitating corruption in countries where it is endemic. Think-tank the Center for International Private Enterprise (CIPE) has warned that small states and transition economies (such as Kyrgyzstan) are particularly vulnerable to ‘corrosive capital’, defined as international financing to countries that lacks transparency, accountability and market orientation. Some of the BRI projects, according to CIPE, fall into that category.

In Kyrgyzstan, two former prime ministers and other officials are standing trial on corruption charges after a power plant modernised with Chinese credit collapsed in freezing temperatures in January 2018.

Kyrgyzstan’s small economy and proximity to China have made it particularly exposed to the effects of BRI-backed infrastructure, says a Foreign Policy Research Institute report. Chinese exports to Kyrgyzstan rose at twice the pace of its imports, leading Kyrgyzstan’s trade deficit with China to widen 47% from 2013 to 2021.What is even more remarkable is the sheer asymmetry of the trade deficit in dollar terms. China  exported some $7.5bn worth of goods to Kyrgyzstan but imported only $80mn in return.

“In its financial dealings with other countries, China acts solely in its own interests,” Klara Sooronkulova, a former judge in the Supreme Court's Constitutional Chamber, told Caravanserai in March 2021.

"Since any disputes on loan agreements are heard in the Chinese courts, there's no doubt that a decision will be rendered in favor of Beijing, and in order to fulfil its obligations, Kyrgyzstan could be stripped of its assets," Sooronkulova said.

Kyrgyz analysts harbour no illusions about whether China actually will help Kyrgyzstan deal with its overwhelming debt. Just as Japarov talked of Kyrgyzstan losing its statehood, they warn the country may have to give up some of its largest infrastructure and energy facilities if it does not pay off its debt to China.

“Beijing will not forgive its loan to Bishkek and will not even reduce it since it has never made such a concession to any state,” predicted Iskender Sharsheyev of Bishkek, director of the secretariat of the National Alliance of Business Associations of Kyrgyzstan.

"This is an old strategy of China's, and its economic instrument of external influence," Sharsheyev said.

There is a precedent here. In March 2021, China requested Kyrgyz mineral deposits as payment for debt, specifically the Zhetim-Too mountain range, which contains billions of tonnes of iron ore, and the Karakeche coal deposit, which could become a site for a metallurgical plant.

Japarov said the Zhetim-Too mine will be developed locally rather than handed over to Chinese or other foreign firms.

“Not one percent, not a single grain of sand from Zhetim-Too will go to foreigners,” Japarov said. “We will develop the deposit ourselves. Zhetim-Too has more than 5.5bn tonnes of ore, which is about $50bn worth of raw materials. We could repay our debt to China with these raw materials, but it by no means includes selling the mine to China."

But government critics have raised the prospect that the authorities might have no choice but to sell off or surrender mining rights to the lucrative deposit to pay off its loans to Beijing.

Beyond mineral and mining concessions, some lawmakers have also mentioned the possibility of the government surrendering partial management of the country’s energy sector.

“China might take control of some strategic Kyrgyz facilities where it invested, if payments are not met. Some experts believe extending China's involvement in Kyrgyzstan's mining sector could be one of the options to relieve the debt” Kubat Kasymbekov, a journalist with RFE/RL's Kyrgyz Service, was reported as saying on July 6.

The Bishkek thermal power plant, the Datka-Kemin high-voltage power line and the North-South alternative road are the assets that potentially could be placed under external management if Kyrgyzstan does not pay off its debts on time. Funds for their construction and reconstruction were taken from China in the form of loans.

In 2012, Kyrgyzstan received $390mn for the construction of high-voltage transmission lines and the Kemin and Datka substations in the north and south of the country. A year later, the Export-Import Bank of China allocated $386mn at 2% per annum for the reconstruction of the Bishkek heating plant.