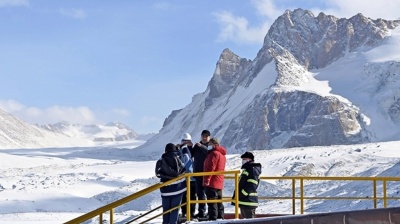 The president eyeing the gold back in January. / Government handout.
By Eurasianet September 14, 2022

“It’s a secret” is becoming a catchphrase to describe how Kyrgyzstan is currently being administered, especially as concerns the giant gold mine that authorities seized last year in the name of a long-suffering public.

To begin, the sudden fall off in reporting on activities at the economically vital Kumtor mine was easily explained away.

Kyrgyzstan’s government was locked in a legal dispute with Toronto-listed Centerra Gold, Kumtor’s operator prior to the sudden imposition of “external management” – code for nationalisation – in May 2021.

Making information about the mine public would have given Centerra the upper hand, top officials argued at the time.

But that legal standoff was settled amicably and for good in July of this year, while Kumtor is still a high-altitude shrine to opacity.

One of the biggest concerns is the mixed messages coming from the top leadership.

Last September, Kyrgyzstan’s national security chief Kamchybek Tashiyev boasted in a public appearance that “not a gram” of gold produced at Kumtor had left the country that year.

His claim did not tally with data from the national statistics committee, which showed gold had continued to be Kyrgyzstan’s chief export.

In fact, committee data released this July revealed that Kyrgyzstan had exported record quantities of gold – 24.8 tonnes – in 2021.

But the committee did not account for where the vast majority of this bounty had been sold, referring to an “undefined country” as the purchaser of 19.2 tonnes, or 77%.

Switzerland is well-known as a longstanding destination for Kumtor’s gold, and sure enough, Swiss trade statistics confirm that was where the gold had been received.

So why the secrecy?

In an interview last month with state media outlet Kabar, President Sadyr Japarov said that the identity of the importing country had been classified “for the security of the delivery.”

Bizarrely, the statistics committee had already identified Switzerland as the destination for exports of a smaller quantity of gold – just over a tonne, along with the United Kingdom (4.08 tonnes) and “others” – 0.47 tonnes.

Japarov and Tashiyev, whose campaign to nationalise Kumtor began a decade ago when the pair were an opposition tandem, are Kyrgyzstan’s two most powerful politicians.

The third leg of the stool is chief minister Akylbek Japarov, not a relative of the president, but who is just as vague as his boss when it comes to answering questions about Kumtor.

Earlier this month, when pressed to report on Kumtor to parliament, he declared his government’s readiness to “answer for every milligram” of gold in due course.

He further complained that media outlets were stirring discord over Kumtor. “Gold is not a toy!” he warned.

Last week it was the emergence of a photo online showing President Japarov’s older brother, Sabyr, clutching a pair of gold bars.

The president’s spokesman Erbol Sultanbayev provoked guffaws when he suggested the snap had been taken in 2016 or 2017, a period when Sadyr Japarov would have been either living abroad or serving out a jail sentence on kidnapping charges. The fact that Sabyr Japarov was holding a face mask, and that the man next to him was wearing one – seemed to point to a more recent date.

Japarov cleared the air during another interview with Kabar on September 8, explaining that the photograph of his brother was taken in Turkey last year and that a Turkish metal refining company that wanted to buy Kumtor’s gold had reached out to Sabyr as a bridge to the president.

No deal materialised, he said.

The president advised people not to “turn this [the photo] into some tragedy”.

Another mining mystery is how things went so wrong for Japarov’s one-time golden boy Tengiz Bolturuk.

Even before the beginning of the seizure of Kumtor, Bolturuk had been a close ally of Japarov’s, representing Kyrgyzstan’s interests on the board of Centerra Gold where he quickly gained a reputation as a hostile interlocutor.

When state officials seized Kumtor in May 2021, he ditched that obsolete role to become the mine’s external manager.

Bolturuk’s three-decades of industry experience proved invaluable to Bishkek in the transition to national control over Kumtor, but his overnight superstardom ruffled feathers.

A brand-new government holding that he chaired called Great Nomads Heritage emerged to become arguably the most important player in the national extractive industry.

He made enemies both in parliament, where some lawmakers complained about his Canadian-Kyrgyz dual citizenship, and at the state mining champion Kyrgyzaltyn, where he reportedly called the shots without formally holding a position.

But in August, Bolturuk was declared to be under criminal investigation over financial misdemeanours that were detected at Kumtor in contracts for fuel, food and equipment.

Worryingly for Bolturuk – a native of Japarov’s home district of Tyup in Issyk-Kul region – the president has said absolutely nothing in his defence.

“I did not allow anyone to interfere in his work and I did not interfere myself, so that he would not later be able to say that because of me he could not fulfil his duties,” Japarov told Kabar of the investigation.

On September 13, Kyrgyzstan’s state prosecutor said it had opened three criminal cases as a result of the investigation with estimated damages to the state totalling more than $12mn. Bolturuk and two others were reportedly taken into custody.

Central Asians targeted in Russia’s desperate mobilisation drive
More pain stored up for Emerging Europe in 2023
Kyrgyzstan, Uzbekistan warn citizens not to sign up to fight for Russia in Ukraine