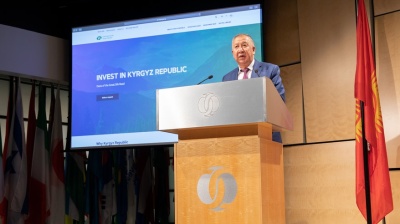 Then first deputy PM of Kyrgyzstan Kubatbek Boronov seen in late 2019 addressing the III Kyrgyz-British Investment Forum, held in London with the support of the EBRD and Chaarat Gold. / Chaarat Gold.
By Kanat Shaku in Almaty May 26, 2021

Foreign investment consequences stemming from Kyrgyzstan’s seizure of flagship gold mine Kumtor from Toronto-listed Centerra Gold have been felt by Chaarat Gold, a miner listed on London's AIM exchange. It has warned of potential delays to the financing and construction of its planned Tulkubash gold project due to the rising uncertainty facing miners in the Central Asian nation.

Chaarat said that “the extensive media coverage of the discussions between Centerra and the Kyrgyz Republic is expected to be negatively perceived by potential future debt or equity investors and possibly result in a delay in the [Tulkubash] project financing”.

The potential difficulties ahead for Chaarat have become clear following the warning served last week to Kyrgyzstan by Canada and the UK, which said in a joint statement in the wake of Bishkek’s takeover of the Kumtor mine that measures that “negatively impact trade and foreign direct investment will further undermine already fragile economic livelihoods of the Kyrgyz people”.

Despite the threat of delays to the construction and financing of its project, Chaarat noted that government representatives have assured it that the Japarov government’s issue with Centerra was specific to the company and its Kumtor mine. Chaarat added that officials had told it that the conflict “in no way” reflects the relationship the country has with other firms.

“All such discussions [between Kyrgyzstan and Centerra] have no impact on any of Chaarat’s operations or activities in country,” Chaarat, which once tried but failed to buy the Kumtor mine, said. It stated that the current impasse between Centerra and the Kyrgyz government has not affected the general business climate in the country.

Chaarat—which has an operating mine in Armenia and assets at various stages of development in Kyrgyzstan—said a resumption of construction at Tulkubash was dependent on financing, which it originally hoped would be in place by June. First gold from the mine, expected to have a construction capital cost of $115mn, was now expected by the second half of 2023.

Centerra’s Kumtor gold mine was seized earlier this month, with officials under the nationalist leader Sadyr Japarov, who was elected president in January, arguing the company had violated environmental regulations.

The miner has initiated international arbitration proceedings, while alleging that a former board member has co-operated with Canadian and US lawyers, as well as with the government of Kyrgyzstan, to stage the expropriation of the Kumtor mine.