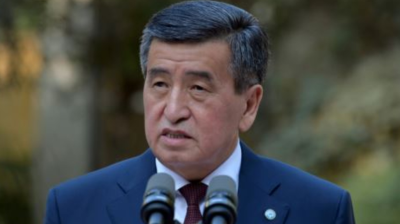 Jeenbekov's shock resignation came the day after he said he would not yet resign as it might trigger “unpredictable developments to the detriment of the state”. / Presidential press service.
By Nizom Khodjayev in Nur-Sultan October 15, 2020

The previous day he insisted he would stay on as president, stating that leaving office now could trigger “unpredictable developments to the detriment of the state” and emphasising that he would only agree to resign after holding a new parliamentary election and calling a presidential election to help stabilise the country. Jeenbekov then held a further meeting with Sadyr Japarov—a fervent nationalist who is also a former top official, ex-lawmaker and convicted kidnapper, freed from jail by protestors amid the demonstrations against Kyrgyzstan’s October 4 parliamentary election results and then voted in by parliament as the country’s new prime minister—who sought to persuade him to immediately step down.

Eurasianet reported that supporters of Japarov threatened to mount an assault on the presidential residence if Jeenbekov did not resign.

Following the meeting with Japarov, Jeenbekov announced his resignation in a statement, saying: “I am not clinging to power. I do not want to go down in the history of Kyrgyzstan as a president who allowed bloodshed and shooting on its people. I have taken the decision to resign.”

He added: “For me, peace in Kyrgyzstan, the country’s integrity, the unity of our people and calm in society are more important than anything else. Military personnel and law enforcement agencies are obliged to use weapons to protect the residence of the head of state. In this case, blood will be shed. It is inevitable. I urge both sides not to succumb to provocations.”

US embassy warns of organised crime

Notably, on October 13 the US Embassy in Bishkek voiced support for “the efforts of President Jeenbekov, political leaders, civil society, and legal scholars to return the political life of the country to a constitutional order" and warned about the threat that organised crime poses to Kyrgyz democracy.

The embassy added in an unusually frank statement: "It is clear that one of the obstacles towards democratic progress is the attempt by organized crime groups to exert influence over politics and elections." It also stated that the impact of organised crime "was evident with vote-buying during the October 4 elections, violence and intimidation in Ala-Too Square on October 9, and irregularities in the parliament session on October 10."

The European Union has, meanwhile, expressed concern at the approach used by Japarov’s supporters to secure Japarov the prime minister’s seat.

Eurasianet observed on October 10 that the “rapid ascendancy” of Japarov “has hinged entirely on a strategy of intimidation executed by hordes of aggressive supporters bussed into the capital, Bishkek”. The publication also said: “Sadyr Japarov’s supporters have assaulted journalists. His mobs broke up a peaceful rally by pelting participants with rocks and bottles. And one of his men attempted to assassinate a political opponent.”

The reference to an assassination attempt concerned an incident that came at the end of the violent dissolving of the rally when a man fired bullets into the departing car of ex-president Almazbek Atambayev. Japarov subsequently claimed it was one of Atambayev’s own bodyguards that fired the shots.

In resigning, Jeenbekov also called on supporters of Japarov and other political figures to stop ongoing rallies to ease tensions. Japarov may be in line to also take the presidency in an acting capacity if the speaker of parliament does not fill the position as he is entitled to do. RFE/RL reported that after Jeenbekov’s resignation was made public, Japarov’s supporters continued rallies in central Bishkek , this time chanting "Japarov is our president!" and demanding parliament's dissolution and the resignation of speaker Kanatbek Isaev, who was appointed on October 13. The speaker told online media outlet 24.kg that he had "no moral right" to the presidency because of the lame duck status of the parliament, which faces a rerun of the disputed elections. Some of Japarov’s supporters on the streets chanted for his arrest.

Japarov first claimed to have been nominated as prime minister on October 10 by an emergency rump session of parliament. However, it was accused of not having a quorum and of using suspect proxy votes of absent lawmakers to make the appointment. Jeenbekov asked the parliament to hold the vote again. Japarov was then nominated as prime minister in an October 14 vote that was accepted by the president.

“I urge Japarov and other politicians to withdraw their supporters from the capital of the country and return a peaceful life to the people of Bishkek,” Jeenbekov also said after announcing he was quitting. “No power is worth the integrity of our country and harmony in society.”
Amid the ongoing state of emergency in Bishkek introduced by Jeenbekov on October 10, around 1,000 Japarov supporters rallied on October 14 in the capital, violating a ban on demonstrations. The crowd demanded Jeenbekov “go away” but dispersed in the evening to respect a curfew.

It is unclear if and how Japarov’s government will organise a presidential election for the near future.

Kyrgyzstan hosts a Russian military airbase and maintains close political and economic ties with the Kremlin. Moscow last week described the situation in the Central Asian nation as chaotic and intimated that it might intervene in the event of an escalation in violence and chaos. Russian President Vladimir Putin’s deputy chief of staff, Dmitry Kozak, flew in for talks with Jeenbekov and Japarov this week, with Moscow stressing that the chaos must be brought to an end.

In a development that preceded Jeenbekov’s resignation, Moscow-based daily RBK reported that Russia’s Finance Ministry was suspending all financial aid to Kyrgyzstan until the political situation was seen as stabilised. RBK said that the last such transfer was a $30mn payment in 2019. Since 2005, Russia has written off debts owed by Kyrgyzstan amounting to more than $700mn.

Kyrgyzstan has been undermined by political volatility for much of its three decades of independence since the end of the Soviet Union. A landlocked republic of 6.5mn people, three of its presidents have now been unseated by unrest since 2005.

Jeenbekov came to power in 2017 as the handpicked successor of previous president, Atambayev, who according to many accounts anticipated being able to control him from behind the scenes. But the new president turned on his former mentor. He was arrested and sentenced to 11 years in prison in June. Atambayev was, like Japarov, freed by protesters during the post-election unrest. He was rearrested the day after bullets were fired at his car.