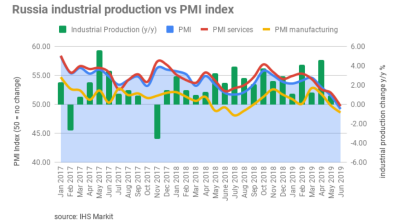 Russia’s service sector activity contracted very slightly in June, but the disappointing contraction in the manufacturing sector in June pulled the overall composite PMI down.

The IHS Markit Russia Services Business Activity Index – a single-figure measure designed to track changes in total Russian services activity – posted 49.7 in June, down from 52.0 in May, and slipped into negative territory. Any result below the no-change 50 mark is a contraction.

The slip in services was mild, but it is the first contraction since January 2016 as the overall economy continues to splutter and services are negatively affected by the stagnant real incomes which have been contracting for six years in a row. The average result for services in the second quarter indicated the slowest expansion in service sector output since the first quarter of 2016.

In June the seasonally adjusted Manufacturing Purchasing Managers’ Index fell to 48.6, down from 49.8 in May – its lowest level in a year.

The falls in both manufacturing and services were due to the evaporation of new business as conditions get tighter. However, the Russian PMI results are also partly due to a cooling of the global economy caused by the trade war between the US and China. Other markets also saw their  PMIs fall: Czechia’s PMI fell to its lowest level in ten years, Poland’s PMI fell to its lowest level in four years and Hungary’s PMI was also in retreat in June, as bne IntelliNews reported.

Weaker demand conditions had the knock-on effect of reducing workforce numbers at a solid rate in Russia that was the fastest since April 2016. The notable turnaround in client demand also caused a drop in business confidence, which has until now been fairly optimistic about the prospects for this year. Business expectations dipped to a three-month low amid less favourable demand conditions and weaker client purchasing power. The degree of confidence is now below the long-run series average, says Markit.

Lower levels of business activity reportedly stemmed from a drop in new orders in June, the first such decline since early 2016, reports Markit. The decrease was only fractional overall, but signalled a notable turnaround from the moderate expansion seen in May. Meanwhile, new export orders for Russian services rose for the ninth month running, albeit at only a marginal rate. External demand continued to outperform the domestic market despite the rate of growth in international sales easing to an eight month low.

In line with weaker demand conditions, employment in services fell for the second successive month in June. The rate of contraction in workforce numbers was the fastest since April 2016, as firms suggested lower business requirements reduced strain on capacity.

And the backlog of service work continued to fall in June amid a decrease in new business and greater efforts to clear outstanding orders. The contraction in incomplete business accelerated to a solid rate that was the fastest for three months.

Composite index dragged down by the lack of new business

The slowdown in both services and manufacturing has negatively affected the composite PMI indices. Manufacturers and service providers both registered slight decreases in new business in June, as lacklustre demand conditions dragged the private sector into contraction. In contrast, the decline in new export orders was driven by the manufacturing sector. Service providers signalled a slight expansion in foreign demand that was outweighed by manufacturing weakness.

The recent fall in employment accelerated and was the quickest since April 2016, with service providers indicating a solid decrease in workforce numbers. Conversely, the decline in staffing levels eased among manufacturers. A reduction in strain on capacity was also reflected in the fastest fall in backlogs for three months.

Inflationary pressures, meanwhile, softened further from January's peak in June, as slower rises in raw material and purchase prices, and weaker demand conditions led to the smallest increase in charges since March 2018.

Commenting on the PMI data, Siân Jones, economist at IHS Markit said: “Russian service providers signalled the first contraction in business activity and new orders since the start of 2016 in June. Weaker domestic demand, and less robust growth in export business, weighed on output. Consequently, firms reined in their hiring even further, with employment falling at the quickest rate since April 2016.

"At the composite level, private sector firms registered a decline in output and new orders, with manufacturers recording an even faster fall in output than service providers. Meanwhile, rates of input price and output cost inflation softened further from January's spike, as slower increases in raw material costs and greater pressure to discount charges became apparent."