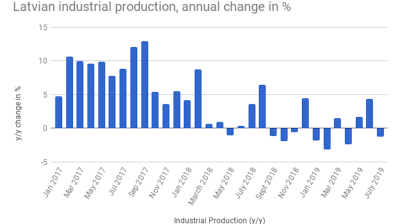 The reading marks a return to falling output after two months of growth offered hope for more sustained performance of the Latvian industry after erratic 2018 and early 2019. The July fall in industrial production points to a slowdown in economic growth expected by most analysts this year.

Latvia’s GDP growth slowed to just 2% y/y in the second quarter, compared to an unadjusted expansion of 3% y/y in the first quarter, the CSB said in late August. Latvia’s economic expansion is currently expected to moderate to around 3% in 2019, from 4.8% the preceding year.

The fall of industrial output in July came on the back of production in the mining and quarrying segment retreating 14.9% on the year, compared to fall of 10.2% y/y the preceding month.

In the electricity and gas supply segment, output fell 6.2% y/y after a growth of 23.5% y/y previously.

Only the manufacturing segment managed to expand in July, growing 1.3% y/y in July after a growth of 0.8% y/y the preceding month.

Within the manufacturing sector, nine out of 16 segments recorded annual production growth in July. The expansion was fastest in production of electrical equipment at 29.7% y/y. Output fell the most in the manufacture of chemicals and chemical products, at 16.3% y/y.

Output in the manufacturing segment inched up 0.1% m/m in July after falling 0.6% m/m in the sixth month. Mining and quarrying saw production fall 3.1% m/m, which followed a contraction of 2.5% m/m in June.

In the utility segment, production dipped 9.1% on the month in July, versus a growth of 13.4% m/m the preceding month.