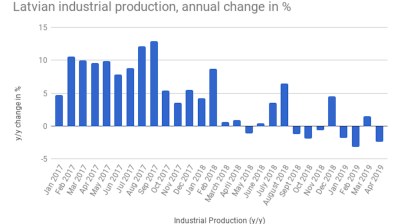 The reading marks a third fall in industrial production in the past four months with March providing an exception. Erratic output figures early in the year appear to be a harbinger of the likely easing of GDP growth in the Baltic state in 2019.

The fall of industrial output in April came on the back of production dipping 22.6% y/y in April following a contraction of 9.6% y/y in March.

Other key segments expanded in the fourth month. There was an expansion of 3.8% y/y in the manufacturing segment, which follows a growth of 4.7% y/y in March.

Production in mining and quarrying jumped 23% on the year in April, a gain of 5pp compared to the preceding month.

Within the manufacturing sector, 10 of 16 segments recorded annual production growth in April. Expansion was the fastest in production of electrical equipment, at 28.8% y/y.

Production also grew 26.9% y/y in repair and installation of machinery and equipment.

Output fell the most in manufacture of furniture, at 10.9% y/y.

Output in the manufacturing segment fell 0.1% m/m in April after falling 1.1% m/m in the third month. Mining and quarrying saw production expand 3.5% m/m after a fall of 0.5% m/m the preceding month.

In the utility segment, production grew 8.7% on the month, versus a growth of 7.1% m/m in February.

The National Bank of Ukraine (NBU) announced on January 21 that it decided not to change its key policy rate at its monetary policy board meeting that day, keeping it at 6%.