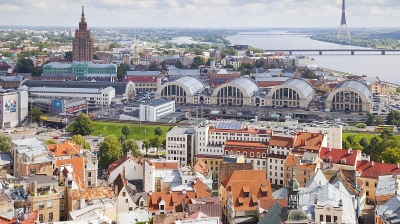 Latvia’s New Unity Party headed by Prime Minister Krisjanis Karins looks set to lead the next government after winning 19% of the vote in general elections at the weekend, preliminary results showed. New Unity will probably have 26 seats in the 100-seat parliament, the Saeima.

Mathematically, it is possible to create a coalition from just three parties among the seven in Parliament – the New Unity, the United List and the National Alliance; however, such a coalition would have a narrow majority with 54 seats in the 100-seat Saeima.

Latvia’s President Egils Levits, who was holding talks on October 3 with all parties at Riga Castle on a one-by-one basis, has said that a broader coalition would be better, including the Progressives Party. However, the left-leaning Progressives and the right-leaning National Alliance are ideologically at odds on several key issues, particularly with regard to social issues, Latvian analysts note.

"My position would be that the coalition should be workable, that it should be able to last for four years and that it should have a serious reform programme where all parties work together and not try to bite each other," Levits said.

“Definitely, the New Unity is in the best position to form a new government. One with the National Alliance and the United List. The second most likely option is that these parties will try to attract the Progressives to the new coalition,” Maris Andzans, director of the Riga-based Centre for Geopolitical Studies, told bne IntelliNews on the morning of October 3.

After the parliamentary elections in 2018, New Unity was the smallest party in Saeima with just 8 seats and less than 7% of the popular vote. It has been gradually gaining public support throughout the coronavirus (COVID-19) pandemic, and especially after Russia’s invasion of Ukraine. Now it has tripled its number of seats and Kariņs, who become the first Latvian PM to finish a full four-year term, looks on course for another.

Despite having the second-largest amount of mandates in the election, the Union of Greens and Farmers, the ZZS, will be left out from the new cabinet, Andzans says.

The party has designated Aivars Lembergs as its prime ministerial candidate, the former Ventspils mayor who was sent to prison for five years for corruption and is considered a national security threat and sanctioned by the United States. The election shows Lembergs retains the affection of a considerable swathe of the population.

“Because of him, they are rejected and isolated by the other top parties,” Andzans emphasised to bne IntelliNews.

Apvienotais Saraksts, (United List), the third-largest grouping, has mixed up very familiar old faces from the non-Lembergite wing of the ZZS and the Regional Alliance.

Analysts say they have managed to persuade the public they constituted a fresh new political force, which makes them the likely trump card in the formation of a new government, some say.

National Alliance, Latvia’s main Latvian nationalist party, had pretty much the same result they achieved in 2018. It was expected that they would do decently this time around with Russia on the offensive and Soviet monuments being demolished, but instead they appear to have hit a glass ceiling, analysts say.

Among the winners is Latvija Pirmaja Vieta (Latvia First), which brings Ainars Slesers, often described as one of Latvia's oligarchs, back to the Saeima, but most likely he will only be sitting on the opposition benches. He has shown that adopting Trumpian-type populism can get you elected in Latvia too.

The biggest surprise was the dismal performance of Harmony, a party favoured by the local Russian community in all the previous 13 parliamentary elections.  Harmony was the winner of the 2010, 2014 and 2018 parliamentary elections but this time around its vote sunk from 19% to a mere 4%, putting them out of Parliament. It appears to have been punished because of its ambivalent position on the Russian invasion of Ukraine.

Andzans called the success of For Stability! Another one of the “biggest surprises”. Little-known before the ballot day, For Stability!, which was established as a breakaway from Harmony, seems to have picked a large number of Harmony votes and is already positioning itself as the new voice of Latvia's Russian speakers.

The failure of the Conservatives was another surpise. The Conservatives, which had 13% of the vote in 2018, sunk down to a mere 3%, also putting them out of Parliament. A lack of charismatic candidates may have been the factor, analysts say, but also the fact that they were just the recipients of protest votes at the last election and this time around their anti-corruption message failed to resonate.

Another loser is the liberal Attistibai/Par! (For Development/For!), which fell back considerably compared to 2018, though remaining still slightly over the 5% threshold to win seats in Saeima.

“Despite the time we all are in, the electoral campaign was very calm throughout – no significant scandals, quite a few debates, really nothing extraordinary,” the analyst said. It seems that for most Latvians, the failing economy – inflation was at a whopping 21.5% in August – was the most acute issue when heading to the ballot.

Karins’ second consecutive term in office would bring continuity in most policy areas, including fiscal conservativism, Western-oriented foreign policy and de-Russification efforts at home. Karins pledged not to make major tax changes in a time of uncertainty and intends to focus on science and education reforms to boost competitiveness in the longer term. However, the new cabinet will face an extremely challenging agenda, including the need to mitigate the cost-of-living crisis (annual inflation stands above 21%), ensure sufficient and affordable energy supplies, and guarantee the country’s security in an unpredictable geopolitical environment.