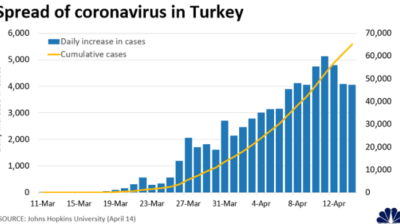 Turkey's lira continued its slide to “red critical” weak levels on April 16 as worries that the country’s emerging economy is uniquely vulnerable to the coronavirus (COVID-19) crisis because it was in such a fragile state before the advent of the pandemic continued to circulate among investors.

At one point, the currency fell past the 6.90-to-the-dollar threshold and there is now clear market concern it could soon pass the 7-to-the-dollar psychologically important border which it has not passed since the height of the 2018 Turkish lira (TRY) crisis.

A complex set of factors lie behind the currency’s new bout of decline, not least of which is that Turkey was slow to respond to its emerging coronavirus outbreak, has failed to bring in full mandatory lockdowns to curb the virus because of worries that they could do irreparable harm to its vulnerable economy and now faces a virus spread that could get beyond control.

Turkey started registering more than 3,000 new coronavirus cases per day after April 4 and has reported more than 4,000 per day since April 8. The sudden surge has alarmed health experts. The country only confirmed its first case on March 11 after insisting it had not recorded a single case for more than two months while the virus spread in neighbouring countries, including at a terrible rate in Iran.

“There will be hard times ahead, because Turkey was already at a macroeconomically vulnerable position before the coronavirus hit,” Can Selcuki, managing director of Istanbul Economics Research, told CNBC earlier this week, following a temporary 48-hour lockdown of Istanbul and 30 other cities that sparked chaos because of a lack of notice given to city dwellers. “Turkey doesn’t have the types of resources it did 10 years ago to compensate for the economic collapse of the coronavirus,” he added. “Turkey is going to need any kind of resources it can get its hands on.”

President Recep Tayyip Erdogan has always prided himself on saying Turkey will never go back to the International Monetary Fund (IMF) for rescue funds on his watch and reasserted that message on April 13, saying the country would not “bow”.

That prompted Timothy Ash, senior emerging markets strategist at Bluebay Asset Management, to say in a note to investors: “Idiotic to rule out cooperation with the IMF when the CBRT [Central Bank of the Republic of Turkey] is bleeding scarce FX reserves.”

“Given the current pace of CBRT reserve depletion, time is fast running out for the CBRT, the lira and Erdogan in terms of economic policy choices,” Ash added.

Looking at the question of IMF assistance for Turkey, Jason Tuvey at Capital Economics, said: “Even if Mr. Erdogan buckles and opens talks with the IMF over financial assistance, finalising a deal would prove to be extremely difficult. In its latest Article IV, the IMF slated Turkey for its economic management and, while the Fund would probably be lenient in the current circumstances, there would still be a major push for a return to orthodox policymaking once the effects of the coronavirus fade. Top of the list would be re-establishing the central bank’s inflation-fighting credibility as well as limiting any further deterioration in the budget position.

“The conditions attached to IMF financing would severely test Mr Erdogan’s commitment to his ‘growth at all costs’ agenda. Of course, there would be serious question marks over Mr. Erdogan’s political future if the economic situation got to the point that even he would consider running to the IMF for financing. But even a new administration might be reluctant to agree to stringent conditions given the potential dent to its popularity and thus hopes of holding on to power.”

Also on the markets’ mind on April 15 was an announcement that Turkey's central government budget deficit shot up to TRY43.7bn ($6.35bn) in March from TRY 7.36bn in February, reflecting new spending and sharply lower tax revenues in the face of the pandemic.

"The Covid-19 related halt in economic activity has started to take its toll on public budget results, as total tax revenues point to around a 20% [annual] deceleration in real terms," Serkan Gonencler, economist at Seker Invest, wrote in a note.

According to the IMF definition, Turkey's 12-month rolling primary deficit is a "whopping" 125bn lira, he noted.

Reuters reported that KPMG said mergers and acquisitions in Turkey totalled $700mn in the first quarter, with a sharp fall in March due to the outbreak. A single deal accounted for $450mn of the volume, pointing to a marked drop from a year earlier.

“Where is the $128 billion?” posters plastered across Istanbul ask Erdogan