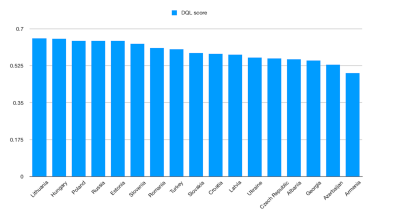 CEE states are clustered around the middle of the Digital Quality of Life (DQL) index.
By bne IntelliNews August 26, 2019

Lithuania is the top ranked economy of the wider Central and Eastern Europe (CEE) region on the Digital Quality of Life (DQL) survey published by online privacy specialist Surfshark.

The index takes into account internet speed and affordability (both broadband and mobile), the presence of personal data protection laws, the state of e-government, the variety and availability of e-entertainment, and the advancement of cybersecurity, the survey says.

Lithuania performed especially well on cybersecurity, though it was only ranked in 23rd place on the index overall. In general, the CEE economies ranked were clustered around the middle of the index.

Lithuania was followed by fellow Central European EU member states Hungary and Poland, with Russia next placed. The three South Caucasus countries, Armenia, Azerbaijan and Georgia, were lowest placed among countries from the wider region.

Worldwide, the index was led by Australia, followed by France and Singapore. Most of the top 10 spots taken up by countries from Western Europe and East Asia. By contrast, the bottom 10 spots of the 65 countries ranked were occupied mainly by countries from South Asia and the Middle East and North Africa region.

However, Surfshark stressed that the median value of the index was 0.6110/1.000, “which reveals that the overall digital quality of life is mediocre. No country scored over 0.8000, indicating drawbacks in various areas,” it said. Indeed, Surfshark’s “perfect DQL” country would combine a set of factors from seven different countries such as Denmark’s e-government services availability, France’s data protection laws, Australia’s mobile affordability and Iceland’s mobile speed. (The perfect DQL country did not, however, include anything from the CEE region.)

Another key finding was that digital quality of life correlates with the country’s GDP/capita. Surfshark also noted that well-developed internet infrastructure alone is not enough for a high DQL: “A composition of less tangible factors (cybersecurity, personal data protection, etc.) is essential as well,” it said.

Lukashenko pushing illegal Iraqi refugees over the border into Lithuania

Russia’s largest online retailer Wildberries has launched direct sales from Belarus, Kazakhstan and China to Russian consumers, the company said in a statement on June 23.

Ljubljana presents first measures to digitalise public services with the aim of improving the efficiency of the public administration in line with the EU’s digital agenda.

YUGOSLAVIA 30 YEARS ON: Big tech from a small country

Croatia, with a population of just over 4mn, has seen the emergence of a slew of high-tech champions in the fields of IT software, hardware and electromobility.

myToys, an online retailer of children’s goods owned by Otto Group, ceased its activity earlier this month in Russia after more than 10 years of operations.

VTB Capital, a division of the state bank VTB, is in the process of acquiring a 15% stake in the Delimobil car-sharing service.