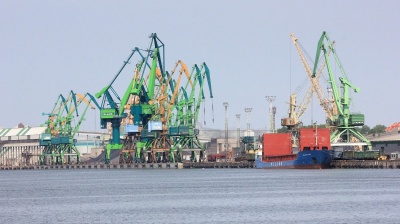 It is estimated that the Port of Klapeida's turnover would shrink by a third with a ban on Belaruskali fertilisers. / Andrej Otrebski
By Linas Jegelevicius in Vilnius December 15, 2021

Lithuanian Prime Minister Ingrida Simonyte announced late on December 14 that her foreign and transport ministers, Gabrielius Landsbergis and Marius Skuodis, will remain in their posts despite the scandal over the way Belarusian fertilisers are still being transported across Lithuania even though they are under US sanctions. Instead, the head of the state-owned railway company LTG (Lithuanian Railways) will step down over the debacle.

Simonyt said she had rejected the two ministers' resignation letters. She also said her government would not step down, something she had hinted at the day before.

“Taking into account the escalated geopolitical situation, as well as the ongoing challenges of COVID-19 and migration, it would be irresponsible to risk and cause uncertainty that would accompany even an attempt to form a new ruling coalition or significantly change the government makeup,” the PM said in a statement.

Landsbergis and Skuodis had offered their resignations after it turned out that Lithuanian Railways would continue transporting fertilisers from Belaruskali – the Belarus state-owned potash manufacturer, which is under sanctions from the US –  to the Port of Klaipeda beyond December 6, when the sanctions went into effect. Belaruskali exports around 95% of all of its fertilisers via Lithuania – around 11 million tons a year – and the trade is one of the regime's biggest cash cows.

Lithuania insists it did not break international sanctions by continuing to permit exports by Belaruskali, but the affair has been extremely embarrassing for the government because it has been one of the most strident voices calling for sanctions on President Alexander Lukashenko's regime. Belarus is currently engaged in what Vilnius has termed "hybrid warfare" by encouraging Middle Eastern migrants to use the country as a gateway to the EU via the Lithuanian and Polish borders.

The US sanctions on the company were announced in August and came into force on December 8. Although they only apply to US entities, it had been assumed that Lithuanian companies would immediately stop dealing with Belaruskali because banks would no longer process the company’s financial transactions. However, Belaruskali shipments via Lithuania did not stop, because Belarus' potash giant had made advance payments to Lithuanian Railways back in November.

The Lithuanian government says that the US sanctions do not directly apply to the transit of fertilisers through Lithuania. However, the government announced last week, after the sanctions had already taken effect, that it was seeking to terminate Lithuanian Railways' contract with Belaruskali.

Belaruskali fertilisers account for around four fifths of all rail freight in Lithuania. LTG Cargo carried around 53mn tonnes of cargo last year and received €397mn in revenue. In the first six months of this year it has carried 24mn tonnes and received €177mn.

The board of Lithuanian Railways has now announced that the company's CEO Mantas Bartuska would step down after a transitional period to mitigate reputational damage to the company.

The Seimas, the country’s parliament, is also now scrambling to pass legislation aiming to ban any transit of Belarusian goods, including Belaruskali fertilisers, via Lithuania due to threats to national security. This will give Lithuanian Railways the legal grounds to break the contract without running the risk of being sued.

BKT, a Klaipeda-based stevedoring firm in charge of handling Belaruskali fertilisers, said that the transit of Belarusian potash fertilisers via Lithuania cannot be suspended as that would run counter to international agreements of Lithuania, the EU and US. BKT sends Belaruskali potash to over 160 countries worldwide.

"There are no and there cannot be any US sanctions for Belarusian potash transit via Lithuania since transit, as a procedure, cannot be subject to sanctions," said Igor Udovickij, who has a 70% stake in BKT. Belaruskali owns the remaining 30% in BKT.

In his words, all states, including the United States, are subject to international treaties – the World Trade Organization agreement and the United National Convention on the Law of the Sea. They guarantee the freedom of transit for states without sea access. "Naturally, having ratified these agreements, the US and the EU cannot violate them and do not violate them," the BKT owner said.

Moreover, he pointed out, the Seimas of Lithuania, the country’s legislature, has ratified three bilateral agreements between Lithuania and Belarus and they set the regime for the freedom of transit of Belarusian cargo via Lithuania and its port of Klaipeda.

All those involved in the transit of potash fertilisers, including Lithuanian state institutions, have consulted the US Department of the Treasury and the European Commission on the application of the sanctions, Udovickij said, and they were told that Belarusian potash can be taken via Lithuania if payments are made in euros, not US dollars. "Therefore, our actions are completely legitimate and coordinated," said Udovickij.

A source within the Port of Klaipeda told bne IntelliNews on December 14 that only “a relatively small part” of the Belaruskali production is subject to EU sanctions.

“The EU does not want vast poor regions, especially in Africa and some Asian countries, which depend on Belarusian fertilisers in their agriculture. to suffer heavily. Also, there is an opinion that a disruption or a ban on the cargo could jack up food prices globally. And lastly, the EU is mindful of Lithuania’s key economic interest in having Belarusian fertilisers transported through Lithuania,” he said.

Lithuanian President Gitana Nauseda, who visited the Port of Klaipeda during his electoral campaign in 2019 and again this summer, has reportedly pledged to oppose sanctioning Belaruskali, as doing so would harm badly the Port of Klaipeda. It is estimated the port's turnover would shrink by a third with a ban on Belaruskali fertilisers. A total ban on Belarusian exports will only accelerate existing moves by Minsk to reroute exports via Russian ports.

A leaked communication between Nauseda's top advisor and the foreign ministry showed that the Presidential Office and the president himself are not in favour of such sanctions, although, publicly, he has spoken out for them.