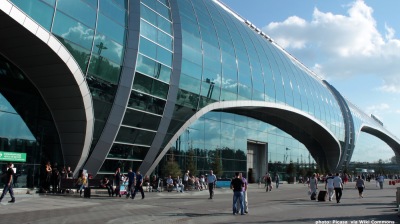 German carrier plans to organise special €1,000 flights to Moscow so rich patrons can fly in, get the Sputnik V coronavirus jab, and fly straight out again.
By Jason Corcoran in Dublin February 25, 2021

The German national carrier Lufthansa plans to set up a first class "Corona Lounge" in a Moscow airport for rich patrons from other countries to fly into the Russian capital and get the Sputnik V vaccination without ever entering the country, bne IntelliNews can reveal.

With Germany facing a chronic shortage of any vaccine at all, despite having invented one of the leading treatments, rich Germans are looking to jump the queue and get access to Russia’s Sputnik V vaccine, which British medical journal The Lancet cleared as safe in a peer-reviewed paper at the start of February.

Europe started the procedure to certify the vaccine for use in the EU in mid January. Germany managed to screw up its procurement of sufficient number of doses to roll out the mass vaccination of its population by sticking to bureaucratic EU public procurement rules. The least endangered Germans have been told they may have to wait until 2022 until they can receive their jabs, due to shortage of the medicine.

But the rich don't want to wait that long. Lufthansa is betting they are willing to buy special tickets to Moscow where the company intends to set up a special lounge in Moscow, isolated from the rest of the airport, where punters can receive their jab without the need to clear the border, and then immediately fly out again before returning a few weeks later for the booster jab.

Lufthansa is understood to be in talks with Russia’s foreign ministry about establishing a regular service between Frankfurt Airport and Moscow Domodedovo, the city’s second-biggest airport, according to bne IntelliNews aviation sources close to the negotiations.

Dmitry Kamenshchik, the billionaire owner of privately held Domodedovo, is believed to have bought into the idea of providing a medical tourism service to vaccinate against coronavirus (COVID-19), although the plan still needs clearance from the Kremlin.

Germany has recently become an unlikely champion of the Sputnik V vaccine, offering support and possible production sites in the hopes of speeding up the EU’s troubled inoculation drive. The rollout of Germany’s own vaccination programme against COVID-19 has been painfully slow, with only 4% of the population vaccinated amid much scepticism and wariness of the effectiveness of the AstraZeneca vaccine. Some commentators are suggesting that the slow and bungled vaccination drive may tarnish the legacy of Angela Merkel, who steps down in September after 15 years as chancellor.

“Germans and Swiss are crying out for the Sputnik vaccine due to the slow rollout and the unpopularity of AstraZeneca,” the bne IntelliNews source said. “There have been many articles in the German press saying that Sputnik is safe and effective against COVID-19 and readers are complaining furiously in comment sections and letters pages that the government is not buying it.”

A transit zone has already been designated at Domodedovo to give the shots. The cost of the medical tourism package, which would involve two round flights to Moscow, would initially be about €1,000, according to the bne IntelliNews source. Sputnik costs just $10 for one shot, making it one of the most affordable vaccines globally. However, one of the biggest obstacles would be the need to arrange transit visas so vaccine tourists could stay two hours to receive the jabs and then recover.

There are plans to extend the vaccine flight programme to flights from Zurich and Vienna and wherever there is demand on the Lufthansa roster, which has been almost completely grounded by the pandemic, according to the bne IntelliNews  source. Kremlin-controlled Aeroflot has not been approached because the scheme would not be commercially viable for a Russian carrier to fly out of Moscow twice with empty planes.

Merkel recently declared that "every vaccine is welcome in the European Union" once it has been approved by the European Medicines Agency (EMA). She said she had already spoken to Russia’s President Vladimir Putin last month about how Germany could assist Russia's vaccine efforts, offering the help of Germany's Paul Ehrlich Institute with the EMA application process.

Germany is in the midst of a third wave of coronavirus infections, and Merkel is urging caution as the country debates how to exit its lockdown and relieve its slowing economy. Infection rates haven’t come down for days, while the pace of vaccinations remains slow. The Chancellor warned that the aggressive British variant is already spreading in Germany, threatening the success of the country’s containment efforts to date.

Earlier this month, German Health Minister Jens Spahn confirmed that talks were ongoing with Moscow to explore production capacities for the Sputnik jab in Germany or elsewhere in Europe. Spahn described the co-operation with Moscow as "constructive and critical,” and stressed that the only way out the pandemic was for the world community to work together.

In November, the Russian Direct Investment Fund (RDIF), the Kremlin’s investment vehicle which is financing Sputnik V, wrote to all the embassies in Moscow trying to stir some interest in the vaccine.

The RDIF and scientists at the respected Gamaleva Institute in Moscow were initially scorned and vilified when Russia announced the approval of the world's first coronavirus vaccine in August last year.

Russia made the vaccine available to the wider public in December, when Europe and the United States were just deploying the first doses of the vaccines made by their pharmaceutical companies.

A sea-change in Western opinion of Sputnik V was triggered on February 2 following The Lancet paper that confirmed the jab is 91.6% effective against symptomatic COVID-19 cases.

The unexpected news was a rare political win for President Vladimir Putin, forcing a delicate balancing act in European capitals considering sanctions against Moscow over the poisoning and jailing of Kremlin critic Alexei Navalny.

In the meantime, Moscow may face competition in the vaccine tourism racket from Havana, where Cuban scientists hope to enter their Soberana 02 vaccine into Phase 3 trials from March 1. Already, Cuba is floating the idea of enticing tourists to its shores with the irresistible cocktail of sun, sand and a shot of Soberna (Sovereign).

In February, The Guardian also reported on how the Knightsbridge Circle, a “travel and lifestyle service” that charges members a £25,000 ($35,400) yearly fee, was advertising vaccine trips to Dubai for any members over the age of 65. The deal offers members the Chinese Sinopharm COVID-19 vaccine and its founder told The New York Times that the club had received 2,000 applications for membership since the deal was advertised.

Meanwhile in Russia, demand for Sputnik V has been sluggish with polls indicating that only 40-50% of the population are willing to be vaccinated. Press reports suggested that about 3.2mn people have had at least a first dose of the vaccine, which is about 2.2% of the population.

Although the vaccine is free and easy to obtain at pop-up vaccination centres in shopping malls around Moscow, people remain sceptical due to the state’s involvement. Many in Russia have refused to be vaccinated and remain wary of the vaccine.

In the past, rich Russians have typically travelled westward to Alpine clinics and Berlin’s Charité hospital for medical checks and surgery, so the idea of wealthy Europeans coming to Moscow for medical tourism is unusual and would be a huge PR coup for the Kremlin.