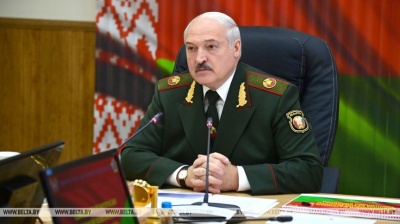 On October 4, Lukashenko admitted a certain level of participation by Belarus in Russia’s invasion of Ukraine during a conference on military security. Despite having previously called it a “war”, contrary to the official Russian narrative, and having tried to position the country as a peace mediator, Lukashenko admitted that “as far as our participation in the special military operation in Ukraine is concerned, we are participating in it. We don't hide it.”

At the same time, Lukashenko tried to defend Minsk’s position by adding that “But we don’t kill anyone.” Instead, Lukashenko claimed that Belarus’ participation was first of all limited to preventing the conflict from spreading onto Belarusian territory, and secondly to prevent a strike on Belarus from NATO countries Poland, Lithuania and Latvia.

Not long after Lukashenko’s last meeting with Putin, Belarus’ defence ministry has heavily ramped up its war rhetoric, claiming that Belarus is under a strong military threat from the West. According to Belarusian Defence Minister Viktor Khrenin, the current “military political situation around Belarus” is evolving around a geopolitical standoff between Russia and the West, a standoff in which he concluded that Belarus finds itself in the epicentre.

According to Lukashenko’s conclusions, tensions will not ease in the near future, but Russia will instead increase its efforts in Ukraine. Lukashenko’s previous statements (albeit cryptic) on Russia’s geopolitical intentions have turned out to betrue, so this is likely based on what Putin told him last week.

Furthermore, Lukashenko accused Ukraine of conducting “provocations” along the Belarus-Ukraine border, claiming that Ukraine had positioned 15,000 troops along the border and was installing engineering equipment, putting up road barriers, as well as checkpoints and firing positions.

Ukraine’s Defence Intelligence Ministry recently reported that Belarus is currently preparing to accommodate 20,000 recently mobilised Russian soldiers. In a powerful statement made last week, Ukraine’s Presidential Advisor Aleksey Arestovich hinted that Ukraine might strike before Russian soldiers cross the Belarusian-Ukrainian border. Arestovich also stressed that “this time we will not be sentimental,” adding that “no one will wait for the next Bucha.”

After Lukashenko’s conference on military security, the State Secretary of Belarus’ Security Council Alexander Volfovich was quick to announce that the Belarusian general public would be informed on the “developing military-political situation” as per orders from Lukashenko.

Volfovich claimed that (the West’s) information war was using fake news to encourage Belarusian society to take “certain actions in order to undermine the peaceful situation in the state;” a likely reference to not only the 2020 protests against Belarus’ Presidential Elections, but also to the Belarusian Railway Partisans, who sabotaged and thereby delayed Russian military transports to Ukraine’s northern front during the first months of Russia’s invasion.

As Lukashenko has already stated before, Volfovich also stressed that Belarus had no mobilisation plans such as the ones Putin announced on September 21. However, Volfovich said that the Belarusian public “should understand what is happing today” and why Belarus is scaling up its military activity.

Lukashenko’s new tasks after his meeting with Putin

After his meeting with Putin, Lukashenko appears to have been forced into a number of further concessions by the Kremlin to help keep him in power. One part of these concessions seems to be the sped up process of Belarusian-Russian political and economic integration through the Union State agreement signed in 1999. This seems mostly (but far from exclusively) to have pertained to the signing of two agreements on harmonising tax and customs legislation, the signing of which Minsk has been stalling for years.

The other appears not only to be military support in the form of hosting freshly mobilised Russian troops to free up regular Russian troops which could be sent to the front; instead, it also looks as if Lukashenko has to provide the Kremlin with more official political support for its geopolitical narratives.

One of Lukashenko’s first showcases of support was a trip to the Russian-occupied Abkhazia region, a trip which the Georgian government called “deplorable and severe.” His next big showcase of support appears to not only be a ramping up of his regular war rhetoric against the West and Ukraine, but also an intensification of spreading the official Russian narrative of what’s happening in Ukraine to the Belarusian general public.

In an interview with the Polish TV channel TVN24, exiled Belarusian opposition leader Svetlana Tikhanovskaya doubted that the Belarusian army would participate in an invasion of Ukraine, since it did not harbour any anti-Ukrainian attitudes.

Many analysts believe that a major reason to why Lukashenko has not dared to send his own troops into the war is because of the low support for Russia’s invasion of Ukraine both with or without the participation of Belarusian troops. It could be that Putin wants Lukashenko to try to turn public opinion around, and if they didn’t before, perhaps Belarus’ Defence Ministry wishes to make the Belarusian army and the public harbour anti-Ukrainian sentiments.

Volfovich’s statement yesterday could signal the beginning of a large-scale anti-Ukraine and anti-way information campaign aimed towards the Belarusian public.

If such a campaign is directly connected to the slow but steady increase in draftees being called up to Belarusian conscriptions offices, a possible Russian reopening of Ukraine’s northern front and Lukashenko’s comment that tensions will not ease in the near future remains to be seen. Either way, it’s bound to be a part of Minsk’s two-sided tactic of portraying itself as a peace-loving victim caught in the epicentre of a geopolitical battle between Russia and the West.

Polish proposed ban on Russian rubber may give the European tyre industry a flat
7 hours ago
Prague to have a new municipal government after record-long negotiations
12 hours ago
Party congresses of Hungarian opposition demonstrate deep divisions
12 hours ago
At least 500 dead after huge earthquake hits Turkey, Syria in early hours
12 hours ago
Turkish minister tells US ambassador ‘Take your dirty hands off Turkey’ as sanctions sparks fly
17 hours ago