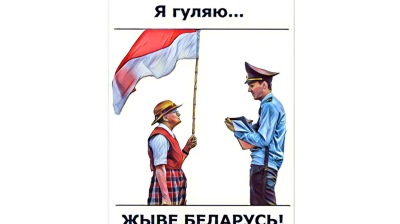 Belarus' self-appointed President Alexander Lukashenko banned his security forces from arresting Belarus’ most famous protester: the 73-year old Nina Baginskaya, who has become an international celebrity for her no-compromise decade-long campaign against the Belarusian strongman.

“She is a person of principle,” Lukashenko told a small but televised cabinet meeting. “She should not be arrested.”

Commonly know simply as “Nina”, the diminutive rebel has become an icon for the protest movement following the disputed August 9 election, where Lukashenko handed himself a landslide victory in what are widely seen as massively falsified elections. MEPs from nearly 30 countries have refused to recognise the legitimacy of the election and have publically supported the opposition leaders’ call for Lukashenko to step down and hold fresh elections.

Whenever Nina arrives to participate in one of the weekly mass demonstrations holding her inevitable red and white Belarusian flag, a symbol of the protests, she is quickly surrounded by demonstrators that chant her name.

Early on during the current protests she was stopped by the OMON riot police as she walked through the crowds with her flag and asked what she was doing. "Ya gulyau" ("I'm going for a walk") she replied, a phrase that has been taken up by protestors and regulalry features on protest posters. In the most recent tribute to her popularity a watch is now being produced featuring Nina and her flag. 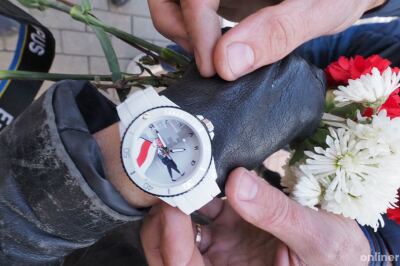 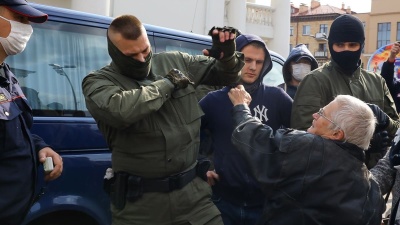 “Alexander Lukashenko orders security forces never to arrest famous elderly protester Nina Baginskaya, calling her a person with convictions. He knows how much outrage there would be if that happened,” tweeted Sarah Hurst, who publishes the X Soviet News newsletter.

And Nina is often in the thick of things. The pictures of her struggling with OMON officers twice her size attempting to take her flag while she claws at their faces to remove their masks or simply kicks them in the ankles have become iconic images of everyday Belarusians' defiance of the authorities.

Baginskaya has been demonstrating against Lukashenko from well before the start of the current protests and first sprang to prominence from an iconic photo of her standing alone in front of a line of police during the 2010 protests, holding a giant red and white flag.

Over the years she has racked up some $20,000 in administrative fines, a fortune by local standards, and the authorities have been docking half her pension to pay them off. But that has not stopped her in her campaign to see Lukashenko gone. “What are they going to do to me?” she asked one interviewer. “Kill me?” 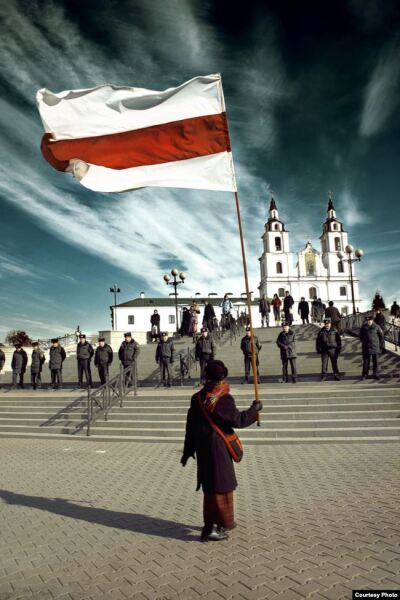