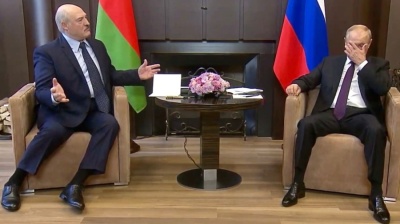 Sunday’s announcement that Russian troops will remain in Belarus indefinitely demonstrates very clearly that President Alexander Lukashenko has now become critically dependent on Russian President Vladimir Putin. There is now speculation that Belarus could soon be all but annexed by Russia and may become a "consolation prize" if Putin does not get his way in Ukraine. Lukashenko still makes some decisions himself, especially when it comes to domestic policies – but Moscow certainly calls the shots now.

On February 20, Belarus’ Defence Minister Viktor Khrenin announced at a press conference that the tens of thousands of Russian soldiers currently in Belarus for military exercises will be staying indefinitely. The soldiers have participated in the “Allied Resolve” military exercises, which are supposed to practise defence against a possible aggressor, not so subtly referring to a Nato country or Ukraine.

With Allied Resolve finished, Belarus has lots of new Russian military hardware placed closed to its border with Ukraine, and Nato estimates say there are now around 30,000 Russian soldiers in Belarus. Currently Belarus has fresh units of Russia’s surface-to-air missile system S-400, fighter jets and much more.

Earlier, Belarusian Foreign Minister Vladimir Makei had claimed that all the Russian soldiers would leave Belarus after the exercises, in line with the country's previous resistance to accepting Russian deployments. We can now expect them to remain until Putin is fully satisfied with whatever he wants to achieve in Ukraine.

For Lukashenko, Putin’s Ukraine brinkmanship come right when he needs it. The Belarusian regime needs the military build-up to shift the focus away from political repressions, to legitimise higher spending on security forces (including the military) and to seem as if it is protecting the population from a great war – where the domestic enemies and instigators of this war are together the opposition. These are his domestic political reasons for going along with Russian militarisation.

Of course, Belarus loses international credibility for going along with Russia’s border provocations, but it had little left anyway. Last week, the British embassy in Minsk advised all British citizens to leave the country due to increased fears of war with Ukraine. The Ukrainian secret service (SBU) also arrested a spy last week, hired by the Belarusian security service (KGB). Shortly after, all Belarusian citizens entering Ukraine were carefully interrogated and forced to show evidence of why they were visiting Ukraine.

Moreover, Ukraine, a big agricultural producer with access to the Black Sea and thereby the Mediterranean, last week refused to buy potash fertilisers from Belarus and banned it from being transited through Ukrainian ports. These kinds of setbacks, however, are just a small price to pay for Lukashenko when compared to the risk of losing power.

Previously Lukashenko has balanced his dependence on Russia with co-operation with the West. However, now that every bridge with the West has been burnt by the repressions after the fraudulent Belarusian elections of 2020, he only has Russia left.

In 2019, prior to the pandemic's disturbances of foreign trade flows, Belarus received 54% of its imports from Russia and 41% of its exports went to Russia. Moreover, Russia also owns nearly 50% of Belarus’ foreign debt.

To maintain political control, the Belarusian regime needs to keep the old Soviet enterprises up and running. This ensures control of the workforce and keeps people from striking. However, these companies have been running deficits since 1991, and the Belarusian regime constantly needs to borrow money in order to keep them alive. This means the regime in its turn has to borrow money from foreign creditors, mainly from Russia.

When Lukashenko and Putin met last week, they discussed how to react to Western sanctions. The Belarusian banks have already joined the Russian banking system amid fears of being shut out from the SWIFT system. Afterwards, Lukashenko announced that Belarusian potash will be transported to a new port being built near St Petersburg. Many analysts have previously been sceptical of Minsk’s promises to use Russian ports. This is because the ports’ capacity is way too small, and besides, they’re already full of Russian goods. Now this looks like a serious attempt to bind the two countries closer together in a new Russkiy Mir.

However, this all comes at a price for Lukashenko. Minsk is currently playing out its last main geopolitical bargaining chip with Russia, namely Belarus' military strategic importance. Belarus acts like a buffer zone between Russia and Nato. Moreover, it allows control over the Suwalki gap, the small piece of land between Belarus and Kaliningrad. Controlling this gap not only helps Russia to secure Kaliningrad, but also to surround the Baltic states in the event of a military conflict.

The payback could be steep. The Belarusian constitutional referendum is coming up this week, and one of the constitutional changes could be that Belarus legalises putting Russian nuclear weapons on its territory. While Lukashenko still hasn’t permitted the establishment of a Russian military base in Belarus, allowing for Russian nuclear weapons to be placed in its country and allowing Russia to have a strong troop presence there is certainly enough to infer that he doesn’t have control of military decisions anymore.

When asked if Belarus would recognise the break-out of Donbas republics in Ukraine last week, Lukashenko replied that "Putin and I will decide what will be in the best interests of Russia and Belarus. Yet this will be a joint decision."

Belarus as a test case

The idea that Belarus is a test case for what Russia wants to do with Ukraine has lately been growing among political analysts. Many experts believe that Lukashenko can no longer show any form of independence from Russia now.

Lithuania’s Vice Minister Albinas Zananavicius has recently been quoted as saying: “We have to recognise we no longer have an independent Belarus, something which is very difficult to accept.” According to him, as well as Belarus opposition leader Svetlana Tikhanovskaya, Belarus is a model for Putin, a test, where he wants to see to what extent the West will allow Russia to take over nascent or developing democracies in Eastern Europe who are not in Nato or the EU.

Rick Fawn, Professor in International Relations, believes that if Russia’s pressure on Ukraine fails to deliver any meaningful outcome, then Belarus could also act as a consolation prize for Moscow.

The Belarusian opposition politician Pavel Latushko, currently living in exile in Poland, believes that Putin will drop Lukashenko at “a convenient moment”, since pushing him aside would rally many Belarusians around Russia, and clear the Kremlin’s name of supporting a deeply unpopular dictator. Latushko believes that this moment is coming, and that “it’s coming very fast.”

For now, though, Putin seems happy with Lukashenko. After their meeting last week, Putin called the talks “friendly and constructive”. The Kremlin seems happy with how the countries’ economic and political integration within the Union State framework is progressing, an integration project which Minsk has been stalling since 1999. Moreover, the Belarusian regime can at least take a short breather after Russia’s finance minister said last week that his ministry is considering refinancing the $1bn debt which Belarus owes Russia and the Eurasian Stabilisation and Development Fund.

This year, the heavy sanctions pressure and the need to keep up domestic repressions will incur high costs for an already heavily constrained Belarusian state budget. Lukashenko needs all the money he can get, and he’ll play out all his cards to ensure his own, his family’s and his regime’s safety. The question is, what use will he be to Putin once he has no cards left?

Belarus faces new sanctions by the EU and asset seizures by Ukraine
Belarus Corruption Watch: How one of Lukashenko’s 'wallets' evades sanctions
VISEGRAD BLOG: When Eastern European states speak out they are now listened to

Belarus Corruption Watch: How one of Lukashenko’s 'wallets' evades sanctions
11 hours ago
Poland basks in the glory of being Kyiv’s chief ally in Europe
3 days ago
Russia forges ahead with gas ambitions in Uzbekistan, Kazakhstan
4 days ago
Mongolian government accused of rushing through veiled law that dismantles freedom of speech
5 days ago
Russia is preparing for spring mass mobilisation
5 days ago