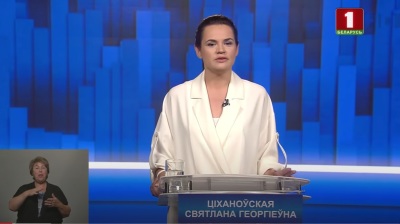 Belarus President Alexander Lukashenko said that he had already had the coronavirus (COVID-19) but showed no symptoms during a televised meeting.

The 65-year-old said during a meeting: "Today you are meeting a man who managed to survive the coronavirus on his feet. Doctors came to such a conclusion yesterday. Asymptomatic.

He had told citizens in April: "They should not even worry. No-one will die from coronavirus in our country. I am saying this in public. This is my firm conviction judging by analysis not only of previous years.”

The current official death toll from the virus in Belarus is 538.

On the same day, leading opposition candidate Svetlana Tikhanovskaya gave her second and more pointed television address, as mandated by Belarusian electoral law. While Tikhanovskaya has chosen not to be polemical, she reminded that election fraud is illegal in remarks clearly aimed at the Central Election Commission (CEC), and directly blamed Lukashenko for Belarus’ poverty.

As bne IntelliNews has reported, Lukashenko has become increasingly belligerent in the last week, visiting military bases and watching police train in anti-riot techniques – all broadcast on national TV.

It was his refusal to take the coronavirus seriously that has fuelled part of the popular protests against him. He dismissed the epidemic as a psychosis and famously recommended Belarusians drink vodka to ward off the sickness.

At a televised meeting on July 28 he claimed to have had the virus and has already recovered with no ill side-effects. He went on to claim that 97% of Belarusians have already been infected and simply didn't notice.

The president’s remarks were called into question by observers who say that an increasingly worried Lukashenko is simply attempting to defuse the tensions that surround the coronacrisis.

Belarusian state TV published the results of an opinion poll linked to the state that claims Lukashenko will win 72.3% of the vote.

The poll was commissioned by the state-owned ONT broadcaster and published on July 28.

The posted table shows that 7.5% of citizens are ready to support the candidate Tikhanovskaya, Anna Kanopatskaya got 1.6%, Sergey Cherechnya got 0.2%, and Andrey Dmitriev received 0.7%.

“The figure is indicative of the likely manipulated result,” said Alex Kokcharov, a political analyst with IHS Global in a tweet.

An alternative poll conducted by a Russian pollster by phone a week earlier gives Lukashenko about 35% of the vote.

It appears that Lukashenko’s hold on power is not that strong. A separate report by local news site Nexta published what appears to be an internal Belarusian document that details the deployment of OMON riot forces in Belarus’ various cities.

The total count of OMON forces that are the main police unit that would be used to break up any protests is surprisingly small. The total headcount is some 1,200 offices nationwide, according to the document Nexta published, with less than 150 in all the regional cities and a total of 707 OMON offices in Minsk.

If these numbers are accurate then the OMON numbers would be insufficient to quell a large scale protest that seems to be on the cards. However, as bne IntelliNews has reported, the authorities have been running large-scale riot police training at a closed airfield on the edge of Minsk to prepare more officers for a potential showdown.

Tikhanovskaya goes on the attack

Tikhanovskaya’s appeal is based on her image as an honest player in the otherwise rigged election. Her husband, a prominent blogger and activist, is currently in jail and she sent her children abroad this month after the authorities threatened to deprive her of her parental rights.

In her July 28 speech she was noticeably more critical of Lukashenko, directly accusing him of mismanaging the economy and overtly threatening the citizens with police violence if they did not support him in the August 9 elections.

Tikhanovskaya stuck to her main themes and repeated that Belarusian independence was a priority, in a counter to plans floated by Lukashenko that the country will be more closely integrated with Russia.

She also repeated her promise that she would immediately call “free and fair” elections if she became president after releasing the some 17 political prisoners that are currently being held in jail.

In a veiled swipe at the CEC, she reminded viewers that electoral fraud is a criminal offence, implying if the establishment is complicit in fixing the election result they may be personally held accountable.

Tikhanovskaya also called on all citizens not only to come out to vote on August 9 but also to “defend” their vote if the election results are hijacked by the powers that be.

This is a tricky point, as to call overtly for protests is illegal in Belarus, so Tikhanovskaya left her call to action to a vaguer call for “defence” of votes.

“I’m not a politician. I’m here because my husband was running for the post of president of the republic of Belarus and was arrested,” Tikhanovskaya said in her preamble to her televised speech. She then went on to highlight all the other opposition candidates that have either been jailed or have fled the country.

Tikhanovskaya, who has joined forces with the campaign heads of the other jailed opposition leaders, has lit a fire under the people of Belarus, who have been coming out in their tens of thousands to see her speak at campaign rallies across the country in an unprecedented show of defiance to Lukashenko, who has been in office for 26 years.