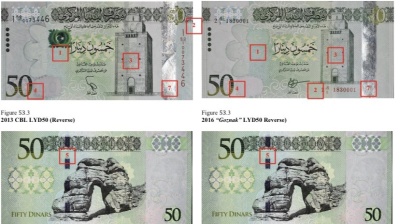 The US State Department has accused Russia of destabilising Libya by flooding it with fake money / wiki
By Ben Aris in Berlin June 1, 2020

The US State Department has announced that Malta seized $1.1bn worth of “counterfeit” Libyan dinars that were travelling by ship to the Libyan parallel government and were printed by the Russian state-owned company Goznak.

The news of the customs seizure first broke after a press release from the US State Department.

“The United States commends the Government of the Republic of Malta’s announcement May 26 of its seizure of $1.1bn of counterfeit Libyan currency printed by Joint Stock Company Goznak — a Russian state-owned company — and ordered by an illegitimate parallel entity.  The Central Bank of Libya headquartered in Tripoli is Libya’s only legitimate central bank.  The influx of counterfeit, Russian-printed Libyan currency in recent years has exacerbated Libya’s economic challenges. The United States remains committed to working with the United Nations and international partners to deter illicit activities that undermine Libya’s sovereignty and stability, and are inconsistent with internationally recognised sanctions regimes.  This incident once again highlights the need for Russia to cease its malign and destabilising actions in Libya,” Morgan Ortagus, the department spokesperson, said in a statement posted on the department's portal.

Goznak countered with a statement of its own, saying that the banknotes were a legitimate commission by the parallel central bank in Tobruk.

“The order of banknotes from Goznak JSC was approved by the board of directors of the Central Bank of Libya back in 2015. The right of the Central Bank of Libya in Tobruk to conclude such contracts was secured in 2016 by a decision of the Government of National Unity (Tripoli). Despite all the disagreements of the parties, this decision has not been cancelled and is still valid. The corresponding contract with our company was signed by a person vested with all the necessary powers for this,” Goznak added.

The Russian foreign ministry waded into the scandal on May 30, backing up Goznak and pointing to the fact that the country has two central banks.

“So, that’s not the dinars which are counterfeit, but America’s statements,” the Russian foreign ministry said in a statement.

The parallel central bank in eastern Libya stepped up deliveries of new banknotes from Russia last year, before and after Haftar launched a military offensive to capture Tripoli, according to Russian customs data.

The data obtained by Reuters showed nearly 4.5bn Libyan dinars (more than $3bn) was dispatched in four shipments between February and June 2019 as the parallel government in the east stepped up its money supply to finance its military campaign.

The two sets of banknotes are almost identical and both are widely accepted in commerce, but there are noticeable security feature differences and banks do not accept both notes as fungible.

“The banknotes made as part of the delivery under discussion are a modified series of previous banknotes, and have visual differences compared to them. Samples of these banknotes were approved by representatives of the Central Bank of Libya in the prescribed manner, as a result of which the use of the term “fake” in relation to these banknotes is unreasonable and unlawful,” Goznak said in its statement.

Goznak said the printing and supply of its notes had been approved by the Expert Commission on Libya at the UN Security Council, which “did not find violations of sanctions against this country in accordance with UN resolution No. 2259 (2019), which, in turn, was reflected in report of the Expert Commission in December 2019.”

Russia has been the regular supplier of banknotes to the Haftar administration and sent 843 tonnes of banknotes to him over 2016-2019, according to Russian customs data. Based on additional details published by Reuters in October 2019, Russia may have sent to Libya at least 13.5bn dinars ($9.5bn) over the period.

Libyan dinars printed by Russia have slight differences compared to official currency printed for the Tripoli government by a British firm.

Malta, which only recognises the government in Tripoli, appears to have seized the Libyan currency for the second time since 2019.

“What will Malta do with the intercepted currency is unclear too. It appears Malta would act depending on authorisation by Tripoli-based Central Bank of Libya. Curiously, the Central bank hasn’t declared parallel dinars illegal,” Ivan Tkachev, the economics editor at RBC, said in a tweet.

“[It is also] interesting that the seizure was reported by US, not Malta, even though the State Department cites “Malta’s announcement” (apparently non-published). This hints that [the] Libyan theme may become another point of US sanctions pressure on Russia,” Tkachev added.

Russia’s Goznak is known for printing money for rogue or fragile states. It has printed banknotes for Syria, Venezuela and Yemen. In Yemen there too has been the dual system of parallel currencies, but Goznak provided banknotes to the internationally recognised Central Bank.

On Libya’s system of parallel currencies, it was reported in 2016 that there were 24bn dinars in circulation. Moscow added some 13bn unofficial dinars in four years. Inflation in Libya is projected by the IMF at 22% for 2020.