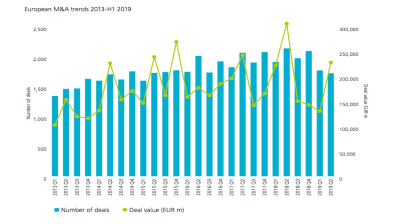 The volume and value of M&A deals in the first half of 2019 fell across Central, Southeast and Eastern Europe in line with the decline seen virtually across the whole of the continent, a new report from law firm CMS in cooperation with Mergermarket revealed.

Southeast Europe saw the volume of deals drop by just 4% y/y to 68, but the value slumped by 61% to €3.3bn. This followed a year during which the volume and value of M&A deals both soared in some of the EU accession candidate countries in the Western Balkans, a 2018 report from CMS and information service EMIS found.

Overall, according to the data compiled by Mergermarket, European M&A deal volume dropped 14% to 3,488 deals, with value down by 32% to €358bn when compared to the same period last year. (As usual, the countries of Central, Eastern and Southeast Europe only accounted for a relatively small share of the total deal value and volume.)

“Weak economic indicators, uncertainty surrounding Brexit and growing protectionism in global trade have contributed to a shift in sentiment in the M&A community and the beginning of a downturn in dealmaking activity,” the report’s authors sum up.

On top of this was the combination of increased stock market volatility and regulatory intervention that has “spooked” dealmakers which, says the report, “has had a particularly chilling effect on megadeals, where confidence is crucial for dealmakers writing large cheques”.

In turn, “The slowdown in deal activity — together with wider economic and market concerns — have taken a heavy toll on dealmaker sentiment about the outlook. Executives fear the climate will worsen,” say the key findings.

The report is based on a survey of 230 senior Europe-based executives from major companies and private equity firms about their expectations for M&A in the year ahead.

Of the survey respondents, 45% are not considering M&A, compared to only 28% last year, while 72% expect financing conditions to become more difficult in the coming year, even though at the moment interest rates are low and finance is readily available. 95% of respondents said they expected distressed M&A to rise, including 64% who said they expected it to rise significantly.

"Corporates and private equity firms are adopting a more prudent approach, meaning we're going to see fewer mega-deals. It will also take longer to complete deals, as buyers take more time over the due diligence process,” said Peter Huber, head of the Corporate/M&A Practice Group at CMS in Vienna, as quoted in the report.

The decline in the first half of this year is in contrast to the high expectations in the previous edition of the report a year ago, when 65% of respondents said they expected M&A activity in Europe to increase, and 22% forecast a significant rise during the year ahead.

For the moment, deals are still getting done. Commenting on the main drivers for M&A, Scott Moeller, professor and director at the M&A Research Centre at the Cass Business School, writing in the report, said companies are still ready to make acquisitions to help them ahead of their competition, in particular in acquiring new technologies and other intellectual property. Other factors are increased shareholder action and societal pressures on companies.

“Societal pressures on companies will also continue to grow and the past year has seen evidence of this as well. With climate change and other environmental issues expanding into the corporate consciousness (such as the need to reduce plastic waste, moves away from meat and dairy products, and demand for alternative energy and battery technology), many companies will respond by making acquisitions to quickly fix their legacy problems, or simply to hedge their future risks,” Moeller writes.

The fall in the volume and value of deals extended to the tech media and telecoms (TMT) sector, after a standout year in 2018. The report says it’s too early to tell whether the slowdown in the first half of 2019 is part of a trend that will continue through the year.

“Commentators are quick to point out that uncertainty in the region may be reducing confidence as investors and strategic acquirers seek to navigate macroeconomic challenges, including most obviously the ever- increasing confusion arising out of Brexit,” commented Anthony Waller, TMT partner in the Corporate/M&A Group at CMS London, but he added that there are still good reasons to remain optimistic about the prospects for TMT M&A in Europe, specifically the continent’s highly successful start-up scene that has spawned 68 ‘unicorns’ (businesses valued at more than $1bn) since 2013.