Mariupol: too calm before the storm? 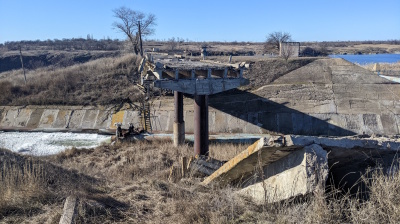 Buildings are strewn with shell holes, the result of intensive artillery fire that came as part of a Russian-backed separatist attempt to seize the city in early 2015. / bne IntelliNews
By Neil Hauer in Mariupol February 15, 2022

There is little to differentiate Mariupol at first sight from many other Ukrainian cities. Lazy vehicles slowly wind through broad Soviet avenues in the centre, while massive industrial plants dominate the suburbs and hinterland. A grey seaside ambience hangs over its busy cafes and eateries, while the chic cocktail bars that increasingly define the downtown of Kyiv, Ukraine’s capital, have made inroads here as well.

Venture a little further, however, and the reminders of a very different reality are not far away. A few kilometres east of Mariupol’s center, buildings are strewn with shell holes, the result of intensive artillery fire that came as part of a Russian-backed separatist attempt to seize the city in early 2015.

Lying barely 10km from the Donetsk frontline, and predominantly Russian speaking, Mariupol is likely to be one of the obvious targets of any renewed fighting amidst the ongoing massive Russian military buildup. Its citizens, and those of nearby villages, nevertheless remain unfazed and few seem to have any idea of the scale of the violence that could now be unleashed upon them.

The area to Mariupol’s north and east was the scene of some of the heaviest fighting of the initial Donbass war in late 2014 and early 2015. It now forms the frontline between Ukrainian and Donetsk People’s Republic (DNR) forces, an ill-defined frontier land that snakes across nondescript fields and abandoned farmland. Villagers there now live with the low-intensity conflict next door, where bursts of gunfire and the occasional exchange of shelling form the new normal.

One such village is Pavlopil. About 15km northeast of Mariupol, its citizens have seen exactly what this war could mean.

On a drab Sunday morning, there is, at first glance, little to differentiate the village from any other.

One local, Viktor Tsado, a 72-year old pensioner, lounges in his wheelchair at the end of the street, just outside his house. He puffs animatedly on a cigarette, looking out towards the horizon that forms the frontline some 4km away.

“It’s still normal now,” Tsado says. Few of the rumours of war filling the media reports have made it here. “In 2014 and 2015 we lived in the basement, but not now,” he says.

Still, what constitutes ‘normal’ here is not peace.

“Just last Saturday, a drone came over the village,” says Tsado. “It was the middle of the day. It dropped four bombs over near the school, on some house. I didn’t see it, but I heard it,” he says, imitating the tell-tale buzzing noise the drone produced.

The conflict has driven many people from the village.

“Of course a lot of people have gone,” says Tsado. “Anywhere you see a house with long grass, those people have left. On this street alone, nine families have left,” he says.

Other locals testify to this fact. On the next street, Tatiana Kopchenko, 32, takes a walk with her husband and two small children.

“We live [now] in Mariupol,” Kopchenko says. “There’s no kindergarten here, but that’s not why we left. We couldn’t stay here with the war.”

Kopchenko moved from Pavlopil in 2014, shortly after the start of the conflict. She now visits the village mostly on weekends, and increasingly so since the introduction of new anti-COVID-19 measures in Mariupol a few months ago.

Still, the idea of raising children here in the present situation is not one that appeals to her.

“Our house was hit [by shelling],” Kopchenko says. “The kids were scared all the time. We had to rent an apartment in Mariupol,” she says.

Similar sentiments are voiced by other villagers.

Valentina Bragina, 79, stands outside her home as her daughter’s family pulls up in a red Prius. She also has memories of a year spent in her basement.

Her daughter chimes in, while her husband and son unload groceries behind her.

“We bring [my mother] supplies, and visit every weekend,” the younger Bragina says. “I would really like if we could stay [and live] here, but it’s just not possible. We try to get her [Valentina] to leave, but she refuses,” she says.

The elder Bragina is hard to faze.

“I was born during war,” she says, referencing her 1942 birthdate, at the height of the Second World War when Pavlopil itself was occupied by Nazi German forces. “Now, I live during it.”

Pavlopil was seized by German troops in 1942, and it was occupied again just a few years ago: DNR forces took the village, or at least part of it, for a time in late 2014.

“It was October [2014], I think,” he says. “My wife was out working one day in the field – I was already on my pension. Some strange men approached her, asking these aggressive questions – ‘Who are you! What are you doing!’ She understood quickly that these aren’t our guys,” Tsado recalls.

The DNR occupation lasted for “about a month” before Ukrainian forces retook the village.

“One day I was going to the river for water, when I saw a bunch of our [Ukrainian] guys with military vehicles,” Tsado says. “They told me to go stay inside, and for a while we could hear them shooting – bak-bak-bak! Then we came out, and [the DNR forces] were gone,” he says.

Yet despite all that, there seem to be few preparations for the new round of fighting – either here or in Mariupol itself.

The Ukrainian army is deployed in Pavlopil, its soldiers billeted in either the derelict houses abandoned by their inhabitants in 2014-15 or the makeshift army base at the edge of town. There is also a large outpost manned by Praviy Sektor, the rightwing militia accused of neo-Nazi sentiments. The members of both detachments refuse to answer questions.

The inhabitants, meanwhile, make it clear that little, if anything, has changed here amid the Russian buildup just across the border.

“There’s no preparations at all,” says Oleg Budnikov, 69, as he shovels manure into a cart. “We were promised evacuation training in maybe a month. Aside from that, nothing," he says.

Tsado, meanwhile, laughs at the prospect. “And where would I go!” he shouts with a smile. “The soldiers will bring us food anyways.”

Back in Mariupol, work at the city’s massive port drones on. The number of ships coming in has dropped in recent years, and even more so recently owing to Russia’s naval buildup in the Black Sea, just outside the Sea of Azov that the city sits on. Otherwise, a sense of calm, even lethargy, prevails.

Oleg Gusak, a docker, says that evacuation routes are the only element of emergency plans the port employees have been briefed on.

“We know where the bomb shelters are, and how to reach them,” Gusak says. “Other than that, I can’t say there’s any special [preparations] at all.”

Meanwhile, just a few kilometres away, the Russian tanks and warships continue to stream in.