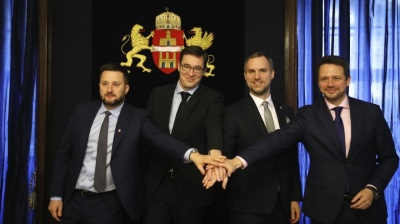 Prague mayor Zdenek Hrib, Gergely Karacsony of Budapest, Matus Vallo of Bratislava and Rafal Trzaskowski of Warsaw pose after they signed the Pact of Free Cities.
By Tamas Szilagyi in Budapest December 17, 2019

Mayors of four V4 capitals, Bratislava, Budapest, Prague and Warsaw, signed a Pact of Free Cities on December 16, a document in which they pledge to lobby for more direct funding from the EU, share their best practices and promote tolerance and liberal values.

The unusual diplomatic event took place in the building of the Central European University (CEU) in Budapest on Monday, a symbolic place to gather for the four leftist-liberal mayors of the four countries.

The private university founded by George Soros in 1991 was forced to relocate to Vienna after it was barred from issuing American degrees in Hungary. The country's nationalist prime minister has waged an all-out attack against the Hungarian-born philanthropist

Deputy rector of the CEU Zsolt Enyed said the mayors represent 5mn people who want change, and Balazs Trencsenyi, a historian and professor at the CEU, gave a presentation on the history of the region.

Gergely Karcsony, the newly elected mayor of Budapest, called for the creation of an “alliance of free cities” in Central Europe after his surprising victory at the local elections in October.

The election marked the biggest setback for right-wing Fidesz ruling party a breakthrough for Hungary's fragmented opposition parties. The four V4 capitals are in a similar political situation since all of them are now run by politicians in opposition to their national governments.

Zdenek Hrib of Prague, Matus Vallo of Bratislava and Rafał Trzaskowski of Warsaw signed the document, in which they stand by the values ​​of freedom, human dignity, democracy, equality, the rule of law, social justice, tolerance and cultural diversity. They agreed to coordinate their efforts to bring urban solutions into EU policies.

The four mayors called for the EU to distribute funds not just to national governments, but directly to European capitals as well.

Over the last decade, a significant part of the EU's development money has gone to people close to power and many in the EU had been outraged by that, Karacsony said.

Warsaw mayor Rafal Trzaskowski told PAP at a press conference following the signing of the deal that there was a proposal to channel 8% of EU funds to cities, with lobbying efforts having been carried out for months in the Eurocities association and through the European Committee of the Regions, the EU's assembly of local and regional representatives.

"Our voices cannot be silenced any more, neither at home nor in Europe. If one of us is muted, the others will raise their voices for them," said Karacsony at the signing ceremony.

He thanked Prague mayor for standing up for the people of Budapest after the ruling Fidesz approved controversial legislation to tighten financing control of theatres.

The mayoral pact mirrors the so-called V4 group, set up by the national governments of the region, which in recent years has often acted as an illiberal solidarity group jointly facing down threats and reprimands from Brussels.