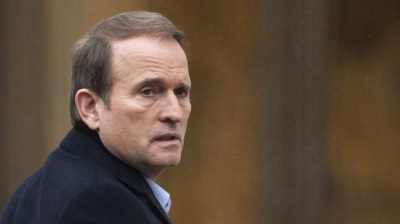 Ukrainian opposition leader and Russia-ally Viktor Medvedchuk appeared at the General Prosecutor’s office to deny charges of treason brought against him a day earlier
By bne IntelliNews May 13, 2021

Medvedchuk is the head of the Political Council of the Opposition Platform, For Life Party and a personal friend of Russian President Vladimir Putin. He has come under attack from Ukrainian President Volodymyr Zelenskiy after the government imposed sanctions on Medvedchuk for “financing terrorism” and closed down three leading TV stations associated with him and his business partners in February.

Things went to the next level this week.

Ukraine's Prosecutor General Iryna Venedyktova, a Zelenskiy loyalist, issued treason charges against Medvedchuk and Taras Kozak, the legal owner of the three television channels that were closed in February.

Medvedchuk’s home and offices were raided by police this week and he reportedly went into hiding. However, he reappeared on May 12 in front of the prosecutor’s office to declare his innocence and said the charges against him are politically motivated.

“I’m not planning on hiding from law enforcement and I’m ready to defend myself because I don’t feel guilty,” he said as cited by the Kyiv Post. “Everything that is going on, it’s political repressions against me as an (opposition) party leader.”

Medvedchuk and Kozak are suspected of colluding with the Russian government to extract natural resources in Crimea, the Ukrainian peninsula that has been illegally occupied by Russia since the 2014 military invasion.

The prosecutor claims Medvedchuk re-registered his Kyiv-based company according to Russian laws to continue extracting gas in the peninsula. She also says that the law allowing Ukrainian companies to continue to work in Crimea, if they re-register in Russia, was specially created for Medvedchuk by the Kremlin.

The oil and gas field that Medvedchuk’s company allegedly worked on is estimated to be worth UAH38bn ($1.4bn), according to Venedyktova. It is known as the “Hlyboke” oil and gas field and is located in the eastern part of Crimea, the Kyiv Post reports.

Medvedchuk first said that he “can’t comment about any gas fields” because he didn’t read the charges against him yet, but then denied working the “Hlyboke” gas field in Crimea.

Medvedchuk is also accused of sharing the location of Ukrainian troops in Donbas, where they were fighting off Russia’s intervention.

“This is absurd, absurd!” Medvedchuk said about this accusation.

Medvedchuk said that he didn’t listen to the tapes, released by the prosecution, that allegedly record his conversations with Dmitry Kozak. But he confirmed that he “frequently talks with Kozak,” who also oversees Russian participation in the Minsk II accords.

Belarus is the “North Korea” of Europe, says US diplomat
COMMENT: Time to end Putin's impunity
bneGREEN: IEA calls for $1 trillion of annual investment into clean energy in developing economies