MEPs back call for probe into Enlargement Commissioner Varhelyi 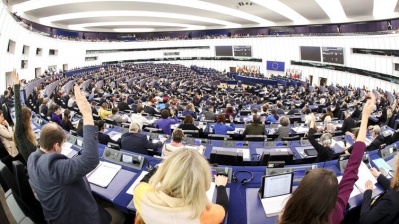 The European Parliament voted in favour of a report on the EU’s foreign and security policy that included a call for an investigation into whether Enlargement Commissioner Olivér Várhelyi broke the European Commission’s code of conduct on January 18.

The call for an independent and impartial investigation, made on the initiative of the centre-left Socialist and Democrats (S&Ds), concerns Varhelyi’s actions in the Western Balkans, specifically towards Bosnia & Herzegovina and Serbia.

The report on the implementation of the EU’s common foreign and security policy for 2022 states that the parliament is “deeply concerned” about reports that Varhelyi “deliberately seeks to circumvent and undermine the centrality of democratic and rule of law reforms in EU accession countries”.

A statement from the Socialists and Democrats, issued after the vote on January 18, refers to reports that “consistently plays down Serbian President Vucic’s attacks on democracy and, allegedly, even assisted [president of Republika Srpska] Milorad Dodik’s separatist actions in Bosnia and Herzegovina”.

Várhelyi was a controversial choice for the enlargement portfolio in Ursula von der Leyen’s Commission. When the new Commission was being appointed in 2019, concerns were raised about his suitability for the position given the Hungarian government’s clashes with the EU over the bloc’s values and Hungary’s backsliding on democracy under Prime Minister Viktor Orban.

MEPs from the S&D and Green/EFA blocs also raised questions about Orban’s ties with Russian President Vladimir Putin, given that Russia and the EU have long struggled for influence in the Western Balkans.

“The S&Ds agreed on Commissioner Várhelyi’s candidacy under the condition that he act only in the interest of the entire EU. Not in the interest of the government in Budapest. Now, three years into the job, there is serious cause to believe that the Commissioner pursues Mr. Orban’s agenda,” commented Thijs Reuten, S&D shadow rapporteur on common foreign and security policy, in the bloc’s press statement.

“The European Commission’s role is to protect Bosnia and Herzegovina’s territorial integrity, promote democracy in Serbia, and secure peace and stability in Montenegro and Kosovo. Not the opposite. Supporting the nationalistic and separatist stances of Dodik would not only be against the Code of Conduct for the Members of the European Commission, but also playing with fire,” Reuten added.

“Accountability for the Commission is crucial. We do not pass judgment. That is up to the outcome of the investigation. But the persistent reports about Orban’s Commissioner cosying up with autocrats to undermine democracy requires immediate action. We cannot allow a Commissioner accused of supporting secessionists to run amok in EU accession countries.”

The report on foreign and security policy included a call for Serbia to align with EU foreign policy by imposing sanctions on Russia.

Serbia is an EU candidate country but has so far refused to align with EU foreign policy and break ties with Russia by imposing sanctions. This has led to calls from some MEPs and other European politicians for its EU accession process to be frozen.

The European Parliament “reiterates its position that further negotiating chapters should be opened only when Serbia strengthens its commitment to reform in the areas of democracy and rule of law and demonstrates full alignment with the CFSP,” the report said.

MEPs also called for sanctions on Dodik in a resolution adopted on January 18. Dodik, who has been threatening for years that Republika Srpska – one of two autonomous entities along with the Muslim-Croat Federation that comprise Bosnia – will split from Bosnia, is already sanctioned by the US.