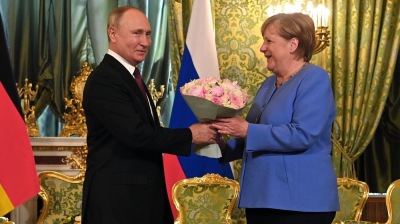 Former German Chancellor Angela Merkel has condemned Russia's invasion of Ukraine in her first comments since leaving office, but was silent on her own role in building up Germany's dependence on Russian energy. / wiki
By bne IntelliNews June 8, 2022

In her first public speech in around six months, the former chancellor described the Russian attack on Ukraine as a "profound caesura", but she was reluctant to be drawn on the topic of Russia and refused to comment on her own role of maintaining close ties with the Kremlin.

Nevertheless, Merkel said Russia's invasion of its neighbour marked the most blatant breach of international law in the history of Europe since the end of the Second World War.

“My solidarity goes to Ukraine attacked and invaded by Russia and support for their right to self-defence,” Merkel said speaking to an audience at a meeting of one of Germany’s powerful trade unions. She added that she fully supports all relevant efforts by the German federal government, the EU, the USA, Nato, the G7 and the UN "to stop this barbaric war of aggression by Russia".

How far-reaching the consequences of the war will be, no one can seriously estimate, said Merkel. But they would be significant, she concluded. “[The massacre at the town of] Bucha is representative of this horror,” she said.

Merkel praised the unity of the EU, and the support of Ukraine’s neighbours like Poland, emphasising that the unity of the EU is key to bringing a peaceful end to the conflict. “We should never take peace and freedom for granted,” Merkel said.

Merkel has kept a low profile since leaving office and didn’t take a job with one of the leading Russian corporates as some speculated she would. Widely seen as one of Germany’s most successful chancellors, her reputation has been sullied since the war started, as Germany has been blamed for moving too close to Russia and making itself, and by extension the rest of Europe, too reliant on Russian oil and gas.

So far, Merkel has not commented on her own mistakes. Other former top politicians, such as the current Federal President Frank-Walter Steinmeier – for years Foreign Minister in Merkel's cabinet – publicly admitted to mistakes in Russia policy. "I was wrong," Steinmeier has said publicly.